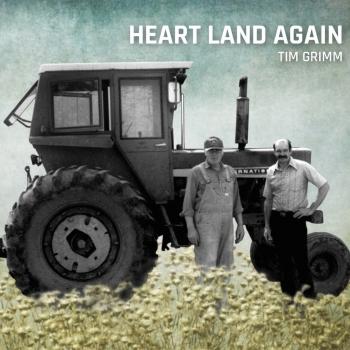 Tim Grimm
lives on an 80 acre Farm in southern Indiana, and has been called “The Poet Laureate of the rural Midwest”. Grimm’s song ‘The Lake’ was part of the soundtrack for A Walk In The Woods, starring Robert Redford, and the director, Ken Kwapis, calls Grimm “Indiana’s Renaissance man”. As an actor, he has appeared in numerous feature films including Clear and Present Danger with Harrison Ford, and for 2 years co-starred on NBC’s Reasonable Doubts. Tim Grimm is also the man behind the successful theatre program and concept CD ‘WILDERNESS PLOTS’ that besides Tim features several of the US Midwest’s finest songwriters. Both TV specials about this show were nominated for Emmy Awards.
For the past 20 odd years the singer-songwriter and actor blended his love for folk music, songwriting and travel with acting in theatre, film and television. He has composed music for the theatre, most recently the wildly successful Finding Home: Indiana at 200 for the 200th anniversary of the state of Indiana.
“One of the leading Folk and Americana exponents…a multi-talented artist.” Americana-UK
“Tim Grimm paints stories with rare and intense color and musicality. Listen, and learn.”Elmore magazine
“…songs that are perceptive and tell stories that resonate. Grimm has a voice of the ages”Lonesome Highway
“Grimm is an engaging storyteller.” Mojo
“One of the best things about listening to a new artist is that they have the power to make you fall in love with music all over again. Tim Grimm just did that.” R2