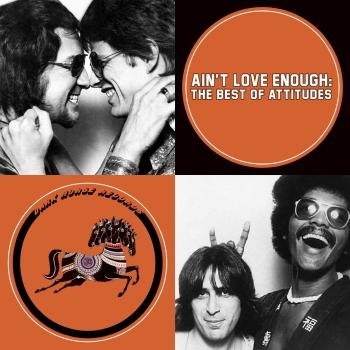 Attitudes
was formed in 1975 right after its members, all noted session aces, played on George Harrison’s album, “Extra Texture (Read All About It).” The former Beatle must have been quite impressed by the quality of their talents and musicianship; he encouraged them to form a group and eventually signed them to his “Dark Horse” label. Jim Keltner was probably the most famous name in the band at the time. His drums have appeared on records by Bob Dylan, John Lennon, James Taylor and countless others. David Foster on keys and Danny “Kootch” Kortchmar on guitar were the up and coming stars of the recording studio while Paul Stallworth on bass had the right voice to perform their blend of soul/funk and pop/rock.
Their debut was simply titled “Attitudes” and was released at the end of 1975. The material included wasn’t that memorable, but the inventive arrangements and stellar playing made this album quite appealing for fans of slick productions like The Doobie Brothers or Boz Scaggs. One of the best moments is the opener, “Ain’t Love Enough” co-written by Foster with Brian and Brenda Russell. Sung nicely by Stallworth, this up-tempo light funk track is spiced up with a Caribbean-flavored arrangement.
Kortchmar wrote and sang three songs that spotlighted his guitar and have a bit of a rock edge. The best one is “Honey Don’t Leave L.A.” that James Taylor would later cover on his 1977 “JT” album. There are also a couple of instrumental fusion jams, “Squank” and “First Ballad,” co-written by the band members that are fine examples of their superior playing. Add to the mix “You And I Are So In Love,” a pretty soul ballad co-written by B.J. Cook and “Lend A Hand” both with Foster’s keyboards and Stallworth’s mellow voice running the show.
A couple of years later, Attitudes made another good but “unknown” record, “Good News,” with guest appearances by Ringo Starr, Booker T. Jones and the Tower Of Power horns. Right after “Good News” was released, the group disbanded. Foster and “Kootch” would go on to become two of the most respected and successful producers in the pop world while Keltner continued with his incredible career as a session player. Paul Stallworth moved to San Francisco and still plays in local bands today.