Live at the Bayerischer Hof 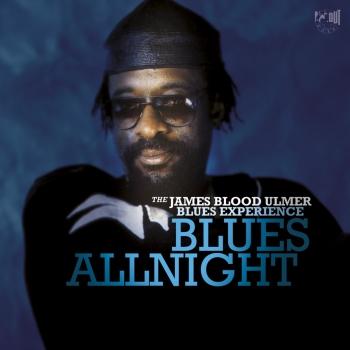 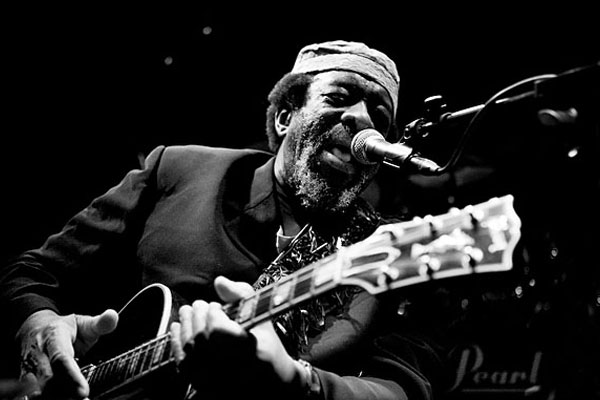 James „Blood“ Ulmer
South Carolina-born electric guitarist James "Blood" Ulmer (1942) relocated to New York in 1971. After playing with Ornette Coleman (1972-74), he developed an aggressive, edgy, jangled, dissonant style at the instrument that transposed Coleman's "harmolodic" free jazz coupled with Jimi Hendrix's psychedelic funk-blues-rock fusion (and loud amplification).
Revealing (1977), in a quartet with tenor saxophonist George Adams, bassist Cecil McBee and drummer Doug Hammond, contained four lengthy jams (particularly Revealing and Overtime). Ulmer used the same kind of quartet, but with Ornette Coleman on alto saxophone and Jamaladeen Tacuma on bass, on the more famous but less adventurous Tales From Captain Black (december 1978), containing eight short pieces. The difference was not so much Coleman, but Tacuma, thanks to whom the sound became visceral and funky. Are You Glad To Be In America (january 1980), with the formidable rhythm section of drummer Ronald Shannon Jackson and bassist Amin Ali, was structured again as a series of (ten) demonstrations (notably Lay Out and Time Out) of Ulmer's potential, somewhere between the Pop Group and Bill Laswell's Material.
Ulmer returned to the extended free-jam format of Revealing with the Music Revelation Ensemble, a quartet with tenor saxophonist David Murray, bassist Amin Ali and drummer Ronald Shannon Jackson. No Wave (june 1980) contained four energetic pieces, particularly Time Table, Big Tree and Baby Talk.
But the albums under his own name valued instead structure and brevity. Increasing the ferocity of his attack via Free Lancing (1981), whose Timeless was almost punk-rock, Ulmer achieved the brutal peak of Black Rock (1982), debuting flutist Sam Sanders and coupling Ali's bass with drummer Grant Calvin Weston, a collection that ran the gamut from hardcore (Open House) to free-jazz (We Bop) and focused on the middleground, a radio-friendly fusion of hard-rock and funk music (Black Rock). The idea was ready for mass consumption, and Ulmer, accompanied only by violin and drums, and relying ever more on his vocals, found a huge audience with Odyssey (may 1983),
Ulmer teamed up with tenor saxophonist George Adams and created the quartet Phalanx. Their Got Something Good For You (september 1985) featured Ali and Weston, whereas Original (february 1987) and In Touch (february 1988) boasted bassist Norris "Sirone" Jones and drummer Rashied Ali.
America Do You Remember the Love? (september 1986) was a jazz-rock quartet session with guitarist Nicky Skopelitis, bassist Bill Laswell and Ronald Shannon Jackson, heavily influenced by Laswell's ambient/world philosophy.
Blues Allnight (may 1989) was a detour into blues-rock.
Ulmer finally resurrected the Music Revelation Ensemble (with Jamaaladeen Tacuma replacing Ali) for Music Revelation Ensemble (february 1988), indulging in six free-form jams (notably Body Talk, Playtime, Nisa). The rhythm section changed (Amin Ali and drummer Cornell Rochester) for Elec Jazz (march 1990), that had the free-jazz workout Big Top (in two parts), Exit (also in two parts), the eight-minute ballad No More and the ten-minute Taps Dance. After Dark (october 1991) contained Maya, the 12-minute avant-ballad Never Mind, and After Dark, his first experiment with a string quartet. Basically, as Ulmer moved away from free jazz in his albums, he moved back into free jazz with the Ensemble.
Ulmer's most ambitious album, Harmolodic Guitar with Strings (july 1993) contained three multi-movement suites for guitar and string quartet (Arena, Page One, Black Sheep), each movement being very short.
With Murray replaced by guest saxophonists (Arthur Blythe on alto in Non-Believer, Hamiet Bluiett on baritone in The Dawn, or Sam Rivers on soprano in In Time, on tenor in Help and on flute in Mankind), the Music Revelation Ensemble rode the cacophonic maelstrom of In The Name Of (december 1993). The funkier Knights of Power (april 1995) was less terrifying, but still contained powerful pieces such as Convulsion (with Bluiett) and The Elephant (with Blythe). Cross Fire (december 1996), with bassist Calvin Jones replacing Ali, used Pharoah Sanders' tenor saxophone (notably in My Prayer) and John Zorn's alto saxophone. These Ensemble albums were also vehicles for Ulmer to showcase his supernatural technique at the guitar, freed from the song-oriented constraints of his solo albums.
The albums recorded under his own name since the mid 1990s were mostly uninspired ventures into blues music (and his vocals did not help). The best ones, the oddly psychedelic Memphis Blood (april 2001), No Escape From the Blues (april 2003) and Bad Blood In The City - The Piety Street Sessions (december 2006), were collaborations with rock guitarist Vernon Reid.
Birthright (2005) was a solo album. In And Out (august 2008) featured a quartet with flute. Live at the Bayerischer Hof documents a collaboration with bassist Amin Ali and drummer Aubrey Dayle.