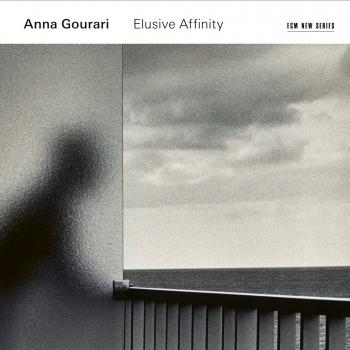 Anna Gourari is a young musician steeped in the venerable Russian piano school. The great pianist Alexis Weissenberg found her playing “almost mystical” when he was on the jury with Martha Argerich, Vladmir Ashkenazy and Nelson Freire that deemed Gourari winner of the Clara Schumann Piano Competition in 1994. She has “a very physical, even visceral quality to her music making that conjures the sound of such golden-age figures as Horowitz and Cortot,” declared Fanfare magazine. With her ECM debut, Gourari offers a set of Canto oscuro: dark songs from the Baroque to the fin-de-siècle, from the Jazz Age to the late 20th century.
Recorded in an acoustically ideal hall for solo piano – the Historischer Reitstadel, Neumarkt, Germany – Gourari performs two of the most affecting of J.S. Bach’s chorale preludes: “Ich ruf’ zu Dir, Herr Jesu Christ” and “Nun komm’ der Heiden Heiland,” in arrangements of quiet sublimity by Ferrucio Busoni. The pianist also includes Busoni’s iconic version of the gripping Chaconne from Bach’s Partita No. 2 for solo violin. From her native Russia, Gourari adds pianist Alexander Siloti’s transcription of Bach’s celestial Prelude in B minor, as well as Sofia Gubaidulina’s early Chaconne, a late 20th-century vessel for ghosts of the Baroque. The album’s centerpiece is Hindemith’s Suite “1922,” a work influenced by both Baroque forms and dances of the Jazz Age; yet its “Shimmy,” “Boston” and “Ragtime” movements are given a dissonant, darkly ironic cast, and the Suite’s “Nachtstück” is night music as haunted as it is haunting, very much “dark song.”
About the program, Gourari says: “Bach is a musical god for all of us. I can hardly imagine that someone wouldn’t adore him and his genius. I have been studying and playing a lot of his music: the Partitas, the Suites, The Well-Tempered Clavier. But along with all of his instrumental works, I have always loved his chorales. Busoni’s transcriptions are the ideal way for me not only to love this music but to play it, too. To me, Busoni’s transcriptions are incredibly intelligent and emotionally touching. One can hear Busoni’s devotion to Bach in every bar, and it took someone of Busoni’s historic stature – being a wonderful pianist, experienced composer and singular personality – to make arrangements such as these.”
For Gourari, combining the Bach-Busoni Chaconne on a recording with Sofia Gubaidulina’s Chaconne of 1962 has been a long-held desire. She says: “There are obvious influences from Bach in Gubaidulina’s work, but also from Busoni. Her piece has been dear to me since I was 16 years old. I have had the honor of meeting her several times, including working with her in Switzerland a few years ago. I think Gubaidulina’s Chaconne is one of those timeless works of art that will be played 100 years from now and beyond.”
At first glance, it might appear that Hindemith’s Suite “1922” is an odd man out in this program. Yet the early 20th century was a “dark age,” after all, something that the composer undoubtedly sought to convey with black sarcasm in his treatment of several popular dances from the 1920s, as he twisted them into what Gourari calls a “fantastic” – and perhaps from our vantage, phantasmal – neo-Baroque suite. Gourari adds: “Dark songs are not necessarily quiet. . .”
Anna Gourari was born in Kazan, Tartarstan, in 1972, and raised in a musical family, with her parents both teachers at the Kazan Music Academy. After initial piano tutelage by her parents, Gourari was receiving lessons from Kira Shashinka by age 7; in her teens, she studied with Vera Gornostaeva. In 1986, Gourari won first prize in the Kabalevsky Competition in Russia; three years later, she won first prize at the Chopin Competition in Göttingen. The young pianist moved with her family to Germany in 1990 so that she could attend the Hochschule für Musik in Munich; her teachers there included Ludwig Hoffmann and Gitti Pirner. In 1994, Gourari won the Clara Schumann Piano Competition in Dusseldorf, and that led to her appearances at major concert venues around the world, including performances with such leading conductors as Colin Davis, Lorin Maazel, Zubin Mehta and Iván Fischer. Gourari’s discography includes works by Beethoven, Chopin, Schumann, Brahms, Tchaikovsky, Strauss and Scriabin, as well as Zemlinsky, Bartók, Prokofiev, Poulenc and Hindemith. She is also known for her performances of contemporary scores by the likes of Sofia Gubaidulina, Rodion Shchedrin and Jörg Widmann. On invitation by Werner Herzog, the pianist worked also as an actress. Gourari portrayed a key character in Herzog’s 2001 film Invincible. And in 2007, she returned to her native country for the first time since her 1990 emigration to make six documentary films on Russian art for Deutsche Welle.