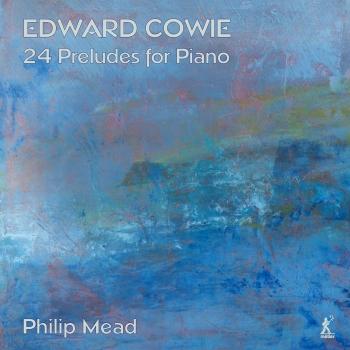 Philip Mead
studied at the Royal Academy of Music, London, and was an international prize win­ner in contemporary music. He has since performed at many festivals in Britain and overseas and has recorded for many radio stations. He had his own series on BBC Radio 3 exploring some hid­den pathways in piano music.
He has been actively involved in contemporary music for many years and has given some impor­tant premieres. He gave the first London performance of the later Stockhausen Piano pieces, works by George Crumb, and Messiaen’s monumental series of piano pieces called Catalogue d’oiseaux. In 2004 he gave the first British performance of Henry Cowell’s Piano Concerto with the BBC Symphony Orchestra broadcast on BBC Radio 3 and BBC Television after having performed it at the Lincoln Centre, New York with the American Symphony Orchestra in the Bard Festival. He has been at the forefront of developing a repertoire for electronics and piano, working with such composers as Jonathan Harvey, Denis Smalley, Javier Alvarez and Horacio Vaggione and has toured them extensively. Tombeau de Messiaen by Jonathan Harvey has now become a con­temporary classic and is performed by many pianists round the world. His CD of the works of Stephen Montague called Southern Lament was awarded the International Piano Award for best contemporary CD of 2006.
Since 1997 he became very interested in the possibilities of expanding the repertoire for brass and piano and has commissioned new works by composers such as Diana Burrell and Martin Ellerby, many of which are available on disc.
As part of his commitment to contemporary music in 1988 he founded the British Contemporary Piano Competition held every 3 years until 2014. He also founded a contemporary piano depart­ment at the London College of Music which dealt exclusively with 20th century/contemporary music. He has organised festivals of the works of George Crumb (1997) and William Bolcom (1998) in London, and has organised 6 complete performances of Bartok’s Mikrokosmos most no­tably in 2014 with 140 pianists from around England each playing one movement which raised £3500 for charity.
He has been awarded honorary degrees by the London College of Music and the Royal Academy of Music, and life membership of the European Piano Teachers Association for services to con­temporary music. He conducts and directs the St Augustine’s Singers which have performed works by Edward Cowie, and the St Augustine’s brass.
Philip now lives in Cambridge, England, is a visiting professor of the University of Hertfordshire and teaches privately in his own studio.
Edward Cowie
Cowie’s first BBC Proms commission was Leviathan, a large scale orchestral work premiered by the BBC Symphony Orchestra in 1975. It marked the first major event in a career that was to gain him national and international recognition for a new kind of ‘voice’ in the music world. Its title – arising from a conjunction between the mighty whale and a book by Hobbes with the same name – can be seen as an indication of a composer whose imagination is deeply embedded in and inspired by the forces of nature. Throughout the 1970s and beyond, a stream of works inspired by wild places on this planet flowed into being, works like his sumptuous Gesangbuch (1975/6), (Signum Classics SIGCD331), the American Symphony (1984), Mount Keira Duets (1985), and his powerful Choral Symphony, Symphonies of Rain, Steam and Speed. This immersion in the study of nature was born of a childhood spent in rural Suffolk and the Cotswolds and continues to form the core of his fertile imagination today.
Two further strands underpin and inspire Cowie’s musical practice and ideas. His undergraduate studies in Physics and practical studies in Painting have been integrated into a ‘fusion-world’ of ideas where science, the visual arts and music coalesce in a creative continuum. In recent years, he has increasingly worked towards his music by means of ‘field studies’, theoretical research and painting-drawing. Studies and collaborations with leading physicists, for example, have not only seen exhibitions of his pre-compositional drawings, but have added a body of new works that directly translate scientific theory and experiment into music. His monumental solo piano series Rutherford’s Lights was inspired by a study of the relationships between theories of light and colour, and his more recent Particle Partita for solo violin acts as a sonic time-line of the history of particle physics.
These ‘fusions’ of disciplines, the bridges between study and practice, are an essential part of the composer’s quest for new ways of forming. Parallels can be found between the linear and pointillist textures, forms, and motifs in his music with the writings and paintings of Klee and Kandinsky. During his period as the first Composer in Association with the BBC Singers (2002-05), Cowie produced a string of large and small-scale pieces that moved through landscapes and natural habitats from all over the world. Gaia, INhabitAT, Lyre Bird Motet and Bell Bird Motet are classic examples of a music that engages with all of the senses in a profound respect for nature’s power to move us.