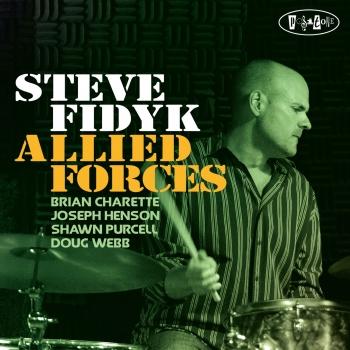 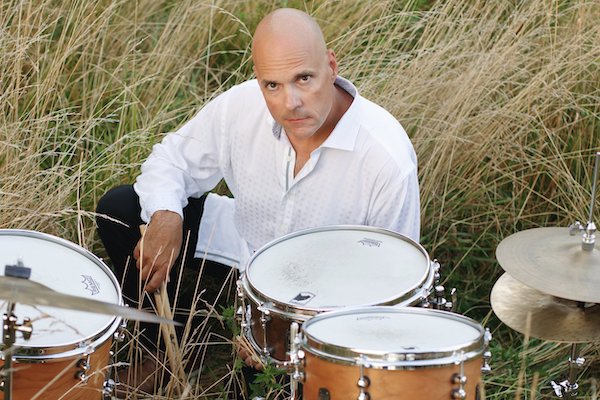 Steve Fidyk
Known for his versatility and musical approach, jazz drummer Steve Fidyk has earned national and international acclaim as an artist, author, composer and columnist. His third recording as a leader features an all-star band of New York’s finest — the impressive front-line of trumpet legend Joe Magnarelli and tenor titan Xavier Perez, alongside the rhythm team of pianist Peter Zak, and bassist Michael Karn. Each member is an active, contributing participant that pushes Fidyk’s hard hitting rhythmic and melodic message direct to the theatre of operations.
Steve’s father John Fidyk, who played tenor saxophone with groups throughout North Eastern Pennsylvania, began taking him on gigs as a substitute drummer at the age of eight. Encouraged by his parents, Fidyk pursued music throughout high school, and majored in music education at Wilkes University. He played drums in the big band under the direction of Bob Wilbur and eventually Tom Heinze. It was at this time that he began to immerse himself in jazz, listening to the great big bands of Count Basie, Duke Ellington, Woody Herman, Stan Kenton, and Buddy Rich. Rich was the first jazz drummer Fidyk saw perform live when he was eight years old, and that experience left a lasting impression.
In 1987, after hearing Fidyk play with the Mansfield State College big band, legendary jazz drummer Joe Morello accepted him as a student. Morello was instrumental in helping Steve with his technique, sound production, coordination, and overall approach to playing the instrument. Morello was also helpful with developing his articulate teaching skills, and Fidyk has been dedicated and committed to education ever since.
For over 21 years, Steve Fidyk was the drummer and featured soloist with the Army Blues Big Band, a premier 17- piece jazz ensemble stationed in Washington DC. During his tenure, he performed for seven US Presidents, numerous dignitaries and in 2008, traveled throughout the Middle East supporting the troops during a USO Holiday Tour. Fidyk currently leads a quartet featuring his original compositions and arrangements. He also performs throughout the US with small groups led by tenor saxophonist Walt Weiskopf and guitarist Jack Wilkins. He is a member of the Jazz Orchestra of Philadelphia, a big band led by trumpeter Terell Stafford.
As an educator, Fidyk is a member of the jazz studies faculty at Temple University, The University of the Arts in Philadelphia, Pennsylvania and serves an educational consultant for Jazz at Lincoln Center's Essentially Ellington Program. He has authored several drum methods for Mel Bay and Alfred Publications, and contributes columns on a regular basis to Modern Drummer Magazine.
Fidyk has appeared on over 100 recordings and his discography as a co-leader includes Big Kids with John DeSalme (U.S. Roots), and two recordings with The Taylor/Fidyk Big Band: A Perfect Match (Write Groove, 2003) and Live at Blues Alley (OA2, 2006). His debut as a bandleader was Heads Up! (Posi-Tone, 2014) featuring Terell Stafford and Tim Warfield. His follow-up recording, Allied Forces (Posi-Tone, 2016) featured Brian Charette, Doug Webb and Joseph Henson. Both solo recordings feature Steve's original compositions and arrangements.
Steve Fidyk attended the University of North Texas, and holds degrees from Wilkes University and The University of Maryland, College Park. He was a student of Joe Morello, Ed Soph, John Riley, Ralph Peterson, Robert Nowak and Angelo Stella.