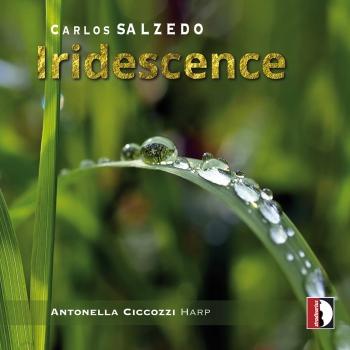 Antonella Ciccozzi
started studying music from an early age in her native city of L’Aquila (Italy) under the instruction of Ofelia Guglielmi until her diploma in harp from the music Conservatory “S. Cecilia”, Rome.
Her musical education continued with the contribution of important figures such as Pierre Jamet with whom she studied in France, Riccardo Brengola (Chamber music at the Accademia Chigiana in Siena) and Piero Bellugi for orchestral training.
She played as a soloist in some of the most important Italian musical Associations such as the Società dei Concerti in Milan; l’Autunno Musicale of the San Carlo Theatre in Naples; Teatro Comunale in Ferrara; Association A. Scarlatti (International Weeks of Chamber Music in Naples); Amici della Musica in Vicenza; Accademia Filarmonica Romana; Nuova Consonanza (Parco della Musica in Rome); Teatro Olimpico in Rome and others as well as abroad (France, Switzerland, Spain, Russia-St. Petersburg Philarmonic, Glinka Museum in Moscow, Saratov Philarmony). Her performance have been broadcasted by the BBC, RADIO FRANCE, the RAI (radio and television) and the Vatican Radio.
She has recorded two CDs for the the recording company TACTUS; the first one is entitled “G. Battista Viotti and other Italian composers of late XVIII century- Harp music”. The other one is about “L. M. Tedeschi and his Complete chamber music with Harp”. Her latest recording made with the label VELUT LUNA is entitled “The Bach Family and the Harp”. It was performed with an antique instrument and contains J. S. Bach’s autographed version on two staffs of the Partita for Violin BWV 1006, and was the first recording of this piece with a harp. Her career as a soloist and chamber musician is flanked by her role as a Teacher of Harp at the Music Conservatory “L. Cherubini” in Florence.