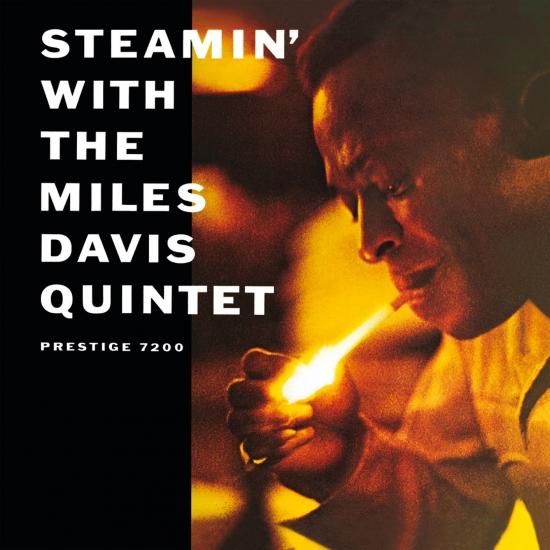 An early pairing of Miles Davis & John Coltrane – one of the duo's mid 50s classics for Prestige, as you might guess from the verb in the title! And although 'Steamin' might be a word that's a bit too firey to describe the action going on here, the album's got a tremendous sense of presence throughout – as Davis' cooler trumpet is matched with Trane's earthier solo work – all supported by Red Garland trio backing in a style that's as near-classic as it comes for 50s jazz. Titles include 'Diane', 'Something I Dreamed Last Night', 'When I Fall In Love', and 'Salt Peanuts'
„Although chronologically the last to be issued, this collection includes some of the best performances from the tapes which would produce the albums Cookin', Relaxin', Workin', and ultimately, Steamin'. A primary consideration of these fruitful sessions is the caliber of musicians -- Miles Davis (trumpet), Red Garland (piano), John Coltrane (tenor sax), and Philly Joe Jones (drums) -- who were basically doing their stage act in the studio. As actively performing musicians, the material they are most intimate with would be their live repertoire. Likewise, what more obvious place than a studio is there to capture every inescapable audible nuance of the combo's musical group mind. The end results are consistently astonishing. At the center of Steamin', as with most outings by this band, are the group improvisations which consist of solo upon solo of arguably the sweetest and otherwise most swinging interactions known to have existed between musicians. 'Surrey With the Fringe on Top' is passed between the mates like an old joke. Garland compliments threads started by Davis and Coltrane as their seamless interaction yields a stream of strikingly lyrical passages. There are two well-placed nods to fellow bop pioneers Charlie Parker and Dizzy Gillespie on a revision of their 'Salt Peanuts.' Philly Joe Jones' mimicking cymbal speak -- which replicates Gillespie's original vocals -- is nothing short of genius. This rendition is definitely as crazy and unpredictable here as the original. Thelonious Monk also gets kudos on 'Well, You Needn't.' This quintet makes short work of the intricacies of the arrangement, adding the double horn lead on the choruses and ultimately redefining this jazz standard. Although there is no original material on Steamin', it may best represent the ability of the Miles Davis quintet to take standards and rebuild them to suit their qualifications.“ (Lindsay Planer, AMG)
Miles Davis, trumpet
John Coltrane, tenor saxophone (except 3 and 6)
Red Garland, piano
Paul Chambers, bass
Philly Joe Jones, drums
Recorded May 11 and October 26, 1956 at Van Gelder Studio, Hackensack
Produced by Bob Weinstock
Digitally remastered