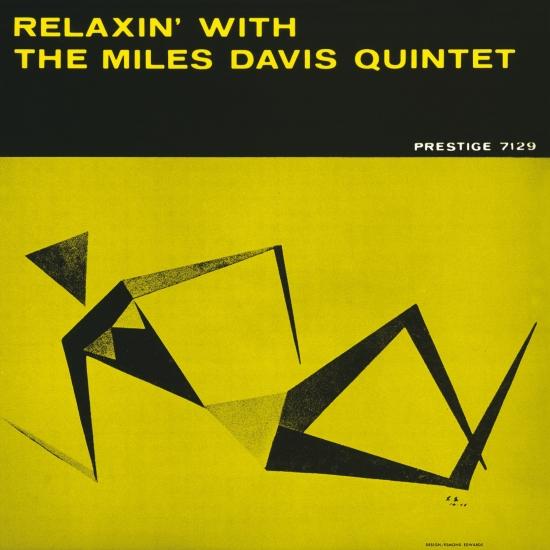 Red Garland's evocation of Big Ben in the opening chords of 'If I Were A Bell' is a witty reminder that you're listening to the premier jazz combo of the 1950s, as Miles Davis once again plumbs the ravine of popular culture to come up with another engaging jazz classic.
In this case, it's a dandy from Frank Loesser's 'Guys And Dolls,' enlivened by Paul Chambers' perfect counter-melodies and Philly Joe Jones' supple brush work. Soon enough, Jones switches up with light stick work, as Chambers fires up his walk and Garland eggs things along with his light, sure, rhythmic strumming. A Harmon-muted Miles responds with delicate, bashful melodies, Coltrane digs in for a jitterbugging reveille and Garland mixes taut, pixieish single lines with velvety big-band chords; Jones defines the laid-back attitude with crisp side-stick accents on four.
Laid-back is the order of the day on Relaxin'. 'You're My Everything' highlights the interaction between Miles and Chambers, but it's Coltrane's expressive clarity that's such a revelation. A year before he'd probably have laid out on such a fragile ditty. On 'It Could Happen To You,' the band gently dances in cut time, while 'I Could Write A Book' is taken at a light gallop (with superb Garland).
However, a pair from Rollins and Gillespie are equestrian events. With his boyish timbre and floating phrases, Miles updates his classic arrangement of 'Oleo' from BAGS' GROOVE, as the drums and piano drop out to allow him to body surf with Chambers. Gillespie's anthem 'Woody'n You' offers one briskly syncopated fanfare after another.
Relaxin' features the Miles Davis Quintet in a pair of legendary recording dates -- from May and October of 1956 -- which would generate enough music to produce four separate long-players: Cookin', Relaxin', Workin', and Steamin'. Each of these is considered not only to be among the pinnacle of Davis' work, but of the entire bop subgenre as well. As with the other titles, Relaxin' contains a variety of material which the band had concurrently been performing in their concert appearances. In a brilliant stroke of time conservation, the scheme was hatched for the quintet -- who includes: Davis (trumpet), John Coltrane (tenor sax), Philly Joe Jones (drums), and Red Garland (piano) -- to perform the equivalent of their live repertoire in the studio for eventual release. The results are consistently superior both in terms of song selection as well as performance. The solid nature of the unit as a singular musical force is immediately apparent. 'If I Were a Bell' -- from the play Guys and Dolls -- includes some remarkable soloing via Coltrane and Garland. Davis' solos are additionally impressive, as they're derived from the same four-note motive as the melody. Hearing the many variations that he comes up with throughout the song conveys how intrigued Davis must have been by the tune, as it stayed in his performance repertoire for decades. Tracks such as 'You're My Everything' and 'Oleo' highlight the synchronic nature of Davis and Coltrane as they carry each other's melodies while trading off solos. The steady syncopation of Philly Joe Jones keeps the rhythms tight and the delicate interplay all the more conspicuous. Relaxin' offers something for every degree of jazz enthusiast. Likewise, the quintet's recordings provide a tremendous introduction for the curious jazz consumer. (Lindsay Planer, AMG)
Miles Davis, trumpet
John Coltrane, tenor saxophone
Red Garland, piano
Paul Chambers, bass
Philly Joe Jones, drums
Recorded May 11 and October 26, 1956 at Van Gelder Studio, Hackensack, New Jersey
Produced by Bob Weinstock
Digitally remastered