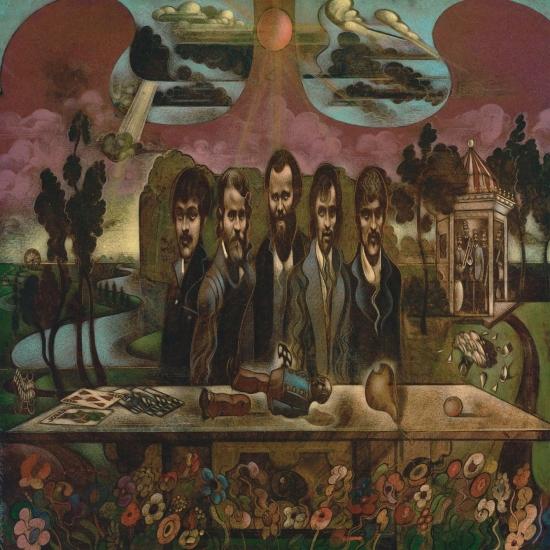 The Band celebrates the 50th Anniversary of their fourth studio album "Cahoots" with an all-new remix and remaster by Bob Clearmountain from the original multi-track masters.
When The Band pulled into the unfinished Bearsville Sounds Studios in Bearsville, New York in early 1971 to record Cahoots, their fourth studio album in as many years, they were still basking in the success of and acclaim for their first three history-making records. The Band’s landmark debut album, July 1968’s Music From Big Pink, drew inspiration from the American roots music melting pot of country, blues, R&B, gospel, soul, rockabilly, the honking tenor sax tradition, hymns, funeral dirges, brass band music, folk and good ol’ rock ’n’ roll to foment a timeless new style that forever changed the course of popular music.
When they released their seminal eponymous second album, The Band, the following year in September 1969 – or “The Brown Album,” as it would lovingly be called – not much more was known about the reclusive group. Even so, August 1970’s Stage Fright, recorded over 12 days on the stage of the Woodstock Playhouse in upstate New York, cemented the fulfilled promise of those initial back-to-back albums that solidified The Band as one of the most exciting and revolutionary groups of the late 1960s, who were able to carry their avowed excellence directly into the 1970s without interruption.
Indeed, The Band, made up of four Canadians and one American, was still purposefully shrouded in mystery at the turn of the decade, allowing for listeners and the music press to let their imaginations run afield about who these men were and what this music was that sounded unlike anything else happening as the psychedelic ‘60s officially wound down. Dressed like 19th century fire-and-brimstone preachers and singing rustic, sepia-toned songs about America and the deep south, The Band – Garth Hudson (keyboards, accordion, horns), Levon Helm (drums, vocals, mandolin, guitar), Richard Manuel (keyboards, vocals, drums), Rick Danko (bass, vocals) and Robbie Robertson (guitar, piano, vocals) – was still somewhat enigmatic as the ‘70s began to unfold and unravel around them, but there’s no denying how The Band was able to forge such an ineradicable impact on the music scene at large heretofore unmatched by any group that came before them, or since.
“Robbie told me, ‘Just think of the original mixes as rough mixes. Pretty much don’t pay attention to the mixes themselves.’” This directive gave Clearmountain the leeway to unclutter some of the album’s original arrangements, all with Robertson’s blessing: “In the beginning of these sessions, we didn’t know if we were making another Basement Tapes where nobody would hear the music or if we were actually making a real record,” Robertson admits. Though Robertson felt the first three Band records wound up sounding better due to a combination of how today’s technology actually enhances the limitations of yesterday’s technology, he doubled down with his instructions to Clearmountain for Cahoots: “I told Bob, ‘There are no rules. So, every mix we do, I want to start from scratch. I don’t even want to listen to the original. I want to listen to the way we hear it now and be fearless and experimental with it.” (Bob Clearmountain)
Rick Danko, bass, vocals
Levon Helm, drums, mandolin, guitar, vocals
Garth Hudson, organ, accordion, saxophones
Richard Manuel, piano, drums, vocals
Robbie Robertson, guitars, vocals
Additional musicians:
Allen Toussaint, brass arrangements on "Life Is a Carnival"
Van Morrison, vocals on "4% Pantomime"
Recorded Early 1971 at Bearsville Sound Studio, Bearsville, New York
Produced by The Band
Digitally remastered