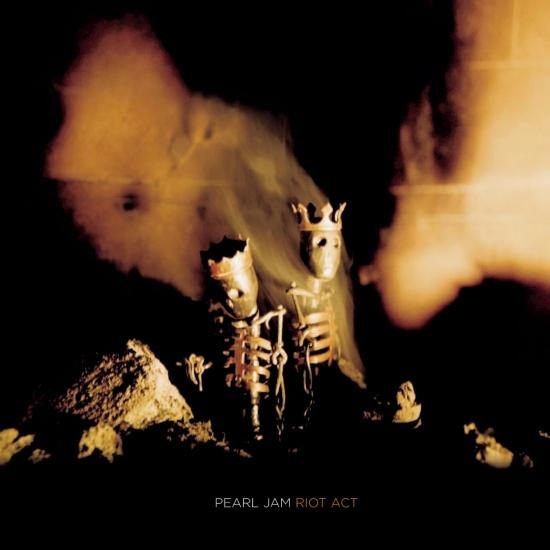 Riot Act is the seventh studio album by American rock band Pearl Jam, released on November 12, 2002 through Epic Records. Following a full-scale tour in support of its previous album, Binaural (2000), Pearl Jam took a year-long break. The band then reconvened in the beginning of 2002 and commenced work on a new album. The music on the record featured a diverse sound, including songs influenced by folk, art rock, and experimental rock. The lyrics deal with mortality and existentialism, with much influence from both the political climate after the September 11, 2001 terrorist attacks and the accidental death of nine fans during Pearl Jam's performance at the 2000 Roskilde Festival.
„In some ways, Riot Act is the album that Pearl Jam has been wanting to make since Vitalogy -- a muscular art rock record, one that still hits hard but that is filled with ragged edges and odd detours. Vitalogy found the band sketching out their ideas for their brand of artsy rock, separating bracing hard rock and experimentalism throughout that fascinating album, and since then they bounced between those two extremes: indulging themselves on No Code, over-compensating with the streamlined Yield. Here, they manage to seamlessly blend the two impulses together in a restless, passionate record that delivers musically and emotionally. If it doesn't announce itself as a comeback or a great step forward, it's because the changes are subtle -- it's a process of their post-Vitalogy sound finally gelling, not making an artistic breakthrough. Given the appealing but haphazard nature of their late-'90s work, it's quite satisfying to have a Pearl Jam album play as strongly as Riot Act, and again some credit must be given to drummer Matt Cameron. He enlivened 2000's Binaural, but his forceful drumming gives the weirder songs and ambitions support and urgency. Also, the production is the best in nearly a decade -- a warm, burnished sound filled with details that enhance the basic song instead of overwhelming them (in other words, it's not No Code, nor is it the Spartan Yield). Again, these are subtle shifts in sound, but they are notable and, given several plays, this does indeed seem like the richest record Pearl Jam has made in a long time.“ (Stephen Thomas Erlewine, AMG)
Eddie Vedder, guitar, vocals
Stone Gossard, guitar
Mike McCready, guitar
Jeff Ament, bass
Matt Cameron, drums, percussion, rhythm guitar
Recorded February–May 2002 at Studio X and Space Studio, Seattle
Produced by Adam Kasper, Pearl Jam
Digitally remastered