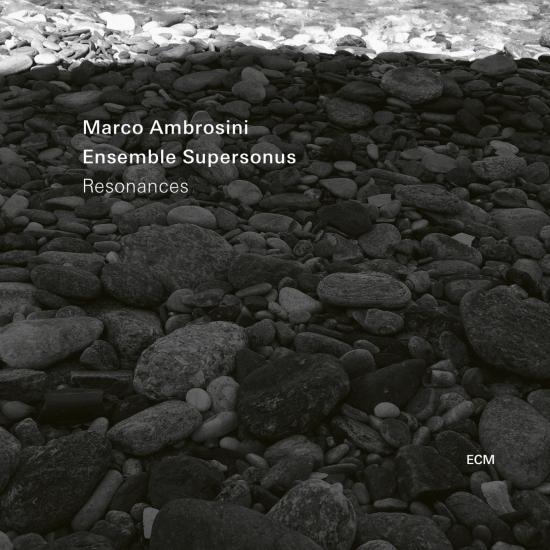 Led by nyckelharpa virtuoso Marco Ambrosini – first heard on ECM with Rolf Lislevand – Ensemble Supersonus applies its unique instrumental blend, capped by the otherworldly overtone singing of Anna-Maria Hefele, to very wide-ranging repertoire. Building bridges between cultures and traditions, Resonances sets compositions by Biber, Frescobaldi and Hildegard von Bingen next to Swedish folk music, Ottoman court music, and original pieces by the band members. Three pieces – “Ananada Rasa”, “Fjordene”, “Ritus” come from the pen of Wolf Janscha, the ensemble’s jew’s harp specialist. Ambrosini’s nyckleharpa solo “Fuga Xylocopae” opens the programme, leading on to a fresh and sparkling account of Heinrich Ignaz Franz Biber’s ”Rosary Sonata No. 1”. All of Ensemble Supersonus contribute to the spirited arrangements of the music.
The group was formed out of a shared search for a sound that would connect archaic styles with baroque and other early music. The current quintet line-up of Supersonus was established in 2014, the group members broadening the repertoire still further with their own compositions. In their work, contrasts, dissimilarities and musical extremes are not perceived as conflicts, but rather as sources of new energy.
Resonances, recorded in 2015 in Lugano, is the band’s first album but both the ensemble and its constituent players have already gained a wide listenership. Anna-Maria Hefele is meanwhile recognised as one of the most creative contemporary exponents of overtone singing, and her polyphonic approach to this vocal technique has been the subject of a series of tutorial videos viewed millions of times. Born near Munich, Hefele graduated from the Carl Orff Institute of the Salzburg Mozarteum in 2018. She has been writing her own compositions for polyphonic solo voice since 2006, worked with choirs including the Obertonchor München, played folk music and music for ballet and theatre. In addition to her unique vocals she also performs on harp and nyckelharpa in her solo concerts. On the Supersonus album she is the author of the piece “2 Four 8” on which overtones bounce like pebbles skimmed over the surface of a lake.
Anna-Liisa Eller, who plays - with both gracefulness and strong dynamic sense - the Estonian plucked string instrument the kannel (from the Baltic zither family and closely related to the Finnish kantele), graduated from the Estonian Academy of music and took further studies with teachers including Rolf Lislevand in Lyon and Trossingen. She has won awards including First Prize at the Helsinki international Kantele Competition in 2011. Eller works in close cooperation with early music ensembles including Lislevand’s Ensemble Kapsberger, Vox Clamantis, Oni Wytars (co-founded by Ambrosini) and Rondellus and has also performed with the Estonian National Symphony Orchestra.
Keyboardist Eva-Maria Rusche composed the angular, propulsive ”Erimal Nopu” together with Marco Ambrosini, with whom she also performs in duo. Rusche was born in Tübingen, and took lessons in piano and organ from an early age. After studies in physics and musicology in Heidelberg, she studied church music and organ in Lübeck and Stuttgart as well as harpsichord and historical keyboard instruments. She credits studies in Vienna with Michael Radalescu and Gordon Murray, numerous masterclasses for organ choir and improvisation with providing fundamental impulses for her artistic development. As a soloist, Rusche plays harpscichord and organ recitals. She plays, furthermore, in ensembles which bring together musicians of different backgrounds including – in addition to Supersonus - Oni Wytars, the Tabla-Takla Connection and Facilité.
Wolf Janscha, born in Vienna, studied classical guitar but has, since the mid-1990s, devoted himself to the jew’s harp on which he is recognised as an authority and virtuoso. The humble lamellophone has a long history, dating back to at least the 4th century BC, and it continues to play a role in folk musics of many cultures around the world. Janscha has researched Norwegian, Austrian, Siberian and Indian playing techniques, among others. His own playing style tends toward strongly stressed rhythm and motivic overtone melodies (see for instance the concluding piece “Ritus” here.)
Marco Ambrosini, born in Forlì, Italy, studied violin, viola and composition at the G.B. Pergolesi Institute in Ancona and at Pesaro’s Rossini Conservatory. One of very few nyckelharpa players working outside the Swedish folk tradition, he took up the instrument in 1983 and has since become one of its most outstanding exponents, shaping a new role for the instrument in baroque and contemporary music. An ECM recording artist since 2004, he has appeared on albums including Rolf Lisevand’s Nuove musiche and Diminiuito, Giovanna Pessi and Susanna Wallumrød’s If Grief Could Wait, and Helena Tulve’s Arboles lloran por Lluvia, as well as his duo project Inventio with accordionist Jean-Louis Matinier. He has also contributed to a further 150 recordings. As soloist and nyckelharpa player he has appeared at many of the world’s great concert halls, from Milan’s La Scala to New York’s Carnegie Hall.
Ambrosini has been active across genres, collaborating in improvisational projects with Michael Riessler, Valentin Clastrier and others. And Ensemble Supersonus, similarly crossing borders, opened the summer 2019 season with an appearance at the INNtöne Jazz Festival in Diersbach, Austria, in June.
Marco Ambrosini, Nyckelharpa
Anna-Liisa Eller, Kannel
Anna-Maria Hefele, Polyphonic Overtone Singing, Harp
Wolf Janscha, Jew’s Harp
Eva-Maria Rusche, Harpsichord, Square Piano