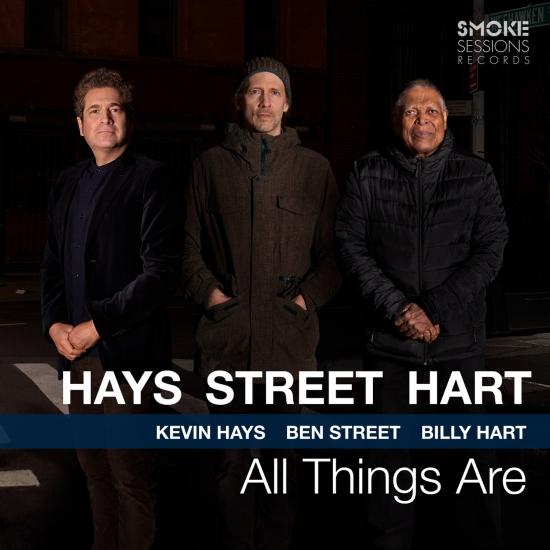 Info for All Things Are

All Things Are, a collaborative encounter between pianist Kevin Hays, bassist Ben Street and drummer Billy Hart. Performed on the bandstand of an otherwise empty Smoke Jazz Club, the album features seven pieces, six composed by Hays, who contributes three original melodies and three ingeniously crafted contrafacts of canonic standards.
The proceedings transpired on the first weekend of December 2020, when Smoke proprietors Paul Stache and Molly Johnson – who have made herculean efforts to sustain the club as a viable venue during the COVID-19 pandemic – booked the trio for two livestream concerts in celebration of Hart’s 80th birthday. “The setting and the circumstances were unique, and the guys were eager to play again,” Stache says. “The music was so incredible that we all thought we should cut a record from these tracks.”
These jazz all-stars from different generations, convening for the first time as a unit, achieved this sublime recital in an empty room, after a single rehearsal. That they were able to coalesce so fruitfully in this environment stems not only from their rarefied musicianship, but also mutual trust built on long-standing relationships.
Street’s been a first-call bassist for everyone who’s anyone in New York’s progressive jazz circles since the late 1990s, when he and Hays first intersected on a private gig at Ahmet Ertegun’s Long Island house. They’ve subsequently worked together with Kurt Rosenwinkel and other ensembles led by luminaries of their generational peer group. He’s played alongside Hart in Hart’s working quartet with Ethan Iverson and Mark Turner since 2006.
Hays – whose c.v. includes 16 albums as a leader, a host of collaborative duos and trios, and consequential side artist work with such luminaries as Eddie Henderson, Sonny Rollins, John Scofield, Chris Potter, and Roy Haynes (and an engagement at Smoke Jazz Club in March 2020 with Ron Carter and Al Foster that was attenuated by the onset of COVID restrictions in New York) – first played with Hart in 1987.
Then 18, Hays was in Madrid, on tour with [drummer] Tony Moreno, who brought him to a club where Hart was playing with Dave Liebman, Richie Beirach and Ron McClure. “Tony introduced me to Billy, and without skipping a beat, Billy said, ‘I’m curious about you. You want to play?’ It was an amazing experience. He didn’t know me, and he didn’t have to do that, but if you know Billy Hart, he does stuff that he doesn’t have to do.”
On All Things Are, Hart decisively imprints his personality on the flow. “It seemed like Billy was playing with Kevin like a singer, which inspired me to think of Kevin that way and guided everything,” Street says, perhaps thinking of Hays’ mid-career choice to showcase his considerable singer-songwriter chops on albums like the eponymous trio recital New Day (2015), the Hays-Lionel Loueke duo Hope (2017), and a duo with vocalist Chiara Izzi titled Across the Sea (2019).
Street continues: “Playing next to Billy, there’s a feeling that he’s searching again and again for this thing he already knows, that could be out of reach but is worth reaching for. This beautiful human drive is inspiring. It takes you out of the mundane self-judgment process of ‘am I playing well or not?’”
"The conversations among this trio range from overt to subtle to “let’s try this.” The open spirit of the session unfolds perhaps just a little tentatively at first but by the closing “Twilight”, they are operating like a well-lubricated engine." (Jim Hynes)
Kevin Hays, piano
Ben Street, bass
Billy Hart, drums 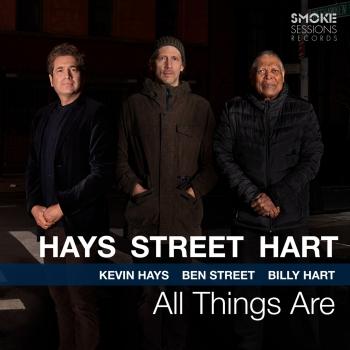 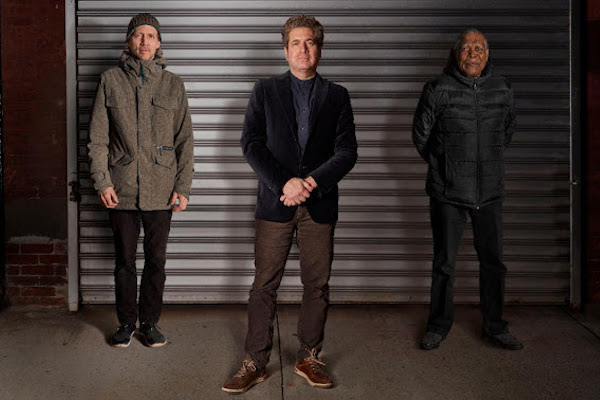 br>Kevin Hays
is one of the preeminent jazz pianists of his generation, having recorded over 20 albums as leader/co-leader and receiving critical acclaim from publications such as The New York Times, Downbeat Magazine and Jazz Times, including a “Coup de Coeur” from the Académie Charles Cros (France). Hays has also appeared on over 60 records as a sideman, his list of notable musical associations including tours and records with Sonny Rollins, Chris Potter, Joshua Redman, Nicholas Payton, Al Foster, John Scofield, and Steve Gadd.
Modern Music (2011, Nonesuch), a two-piano collaboration with Brad Mehldau and composer Patrick Zimmerli, garnered widespread praise, with several works premiered at Carnegie Hall, and tours throughout the US, Europe, and South America. The solo Variations (Pirouet, 2011), was released to excellent reviews throughout North America and Europe and features three sets of improvised variations on several original themes, along with exquisite variations on a fugue by Robert Schumann.
His latest project, the New Day Trio, features bassist Rob Jost and drummer Greg Joseph. Although traditional in instrumentation,the trio’s musical scope and repertoire goes beyond the standard jazz trio, bridging Hays's love of classical, blues, soul, folk and rock music. The New Day Trio have released two albums - 2015’s New Day and 2016’s North (Sunnyside Records) - and toured throughout the US, Europe, and Japan.
Ben Street
studied at the New England Conservatory of Music in Boston with Miroslav Vitous and Dave Holland before moving to New York in 1991. He has performed and toured with many notable artists including Danilo Pérez, Kurt Rosenwinkel, Roswell Rudd, Lee Konitz, David Sanchez, James Moody, Mark Turner, Frank Foster, Clark Terry, Junior Cook, and Jimmy Scott, among many others.
Street's selected discography includes The Next Step, The Enemies of Energy, Heartcore (Kurt Rosenwinkel), Til Then, Live at the Jazz Showcase (Danilo Pérez), Coral, Cultural Survival (David Sanchez), La Bikina (Ed Simon), Morenica (Anthony Coleman), Holiday Songs and Lullabies (Shawn Colvin), At Last (Cyndi Lauper), Guilty (Ethan Iverson, Jorge Rossy, and Chris Cheek), Widening Circles (Barney McAll), Dust (Ben Monder Trio), Space Cowboys Original Motion Picture Soundtrack, Purple Violets (Sam Rivers/Kresten Osgood), and Quartet (Billy Hart).
William “Billy” Hart
(born November 29, 1940 in Washington, D.C.) is a jazz drummer and educator who has performed with some of the most important jazz musicians in history.
Early on Hart performed in Washington, D.C. with soul artists such as Otis Redding and Sam and Dave, and then later with Buck Hill and Shirley Horn, and was a sideman with the Montgomery Brothers (1961), Jimmy Smith (1964–1966), and Wes Montgomery (1966–1968). Hart moved to New York in 1968, where he recorded with McCoy Tyner, Wayne Shorter, and Joe Zawinul, and played with Eddie Harris, Pharoah Sanders, and Marian McPartland.
Hart was a member of Herbie Hancock’s sextet (1969–1973), and played with McCoy Tyner (1973–1974), Stan Getz (1974–1977), and Quest (1980s), in addition to extensive freelance playing (including recording with Miles Davis on 1972’s On the Corner).
Billy Hart works steadily and teaches widely. Since the early 1990s Hart spends considerable time at the Oberlin Conservatory of Music, and is adjunct faculty at the New England Conservatory of Music and Western Michigan University. He also conducts private lessons through The New School and New York University. Hart often contributes to the Stokes Forest Music Camp and the Dworp Summer Jazz Clinic in Belgium.
He leads the Billy Hart Quartet with Mark Turner, Ethan Iverson, and Ben Street, which has released two albums on ECM Records.