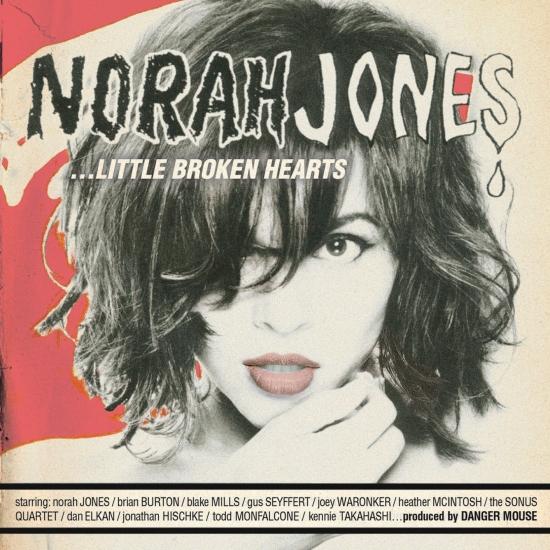 Little Broken Hearts is the fascinating next step in the artistic evolution of Norah Jones, who has flitted between easy listening, jazz, lounge, country, punk and beyond in her career to date. Her stunning new album is produced by Danger Mouse (aka Brian Burton) and features original songs co-written by Jones and Burton that give her an arguably more edgy sound than ever before.
„On 2011’s Rome, singer Norah Jones, producer Brian ‘Danger Mouse’ Burton, guitarist Jack White and film score composer Daniele Luppi paid homage to old Italo-Western movies with twinkling chimes, twangy guitar riffs, and notable vocal performances. While many of the instrumentals held up without words, the concept album saw new life when White and Jones took to the microphone. On the song Black, for example, Jones’ rich textures added a sultry layer to the reflective composition. On Problem Queen, she injected the same dreamy resonance into the melody, except the results were livelier than before, thanks to the track’s rolling keys and buoyant percussion. If anything could be gleaned from the project, it’s that good things happen when Jones sings atop Burton’s arrangements.
On Little Broken Hearts, the two musicians explore the concept of heartbreak, investigating its unpleasant aspects with refreshing candour and sardonic wit. Albums about heartbreak certainly aren’t new, but Jones puts a fresh spin on the familiar topic with lovelorn musings that are wistful and carefree, meditative and ebullient. Good Morning, the album’s effective opener, is a delightfully sweet blend of airy synthesizers and melancholic strings, held together by Jones’ angelic falsetto. “I’m folding my hand,” the singer softly repeats over Burton’s oceanic production. She’s 22 carries a similar ventilated backdrop, but the result is a bit more pensive when paired with Jones’ gloomy deliberation: “You can throw away, every word I say.”
Then there’s the haunting Miriam, a morbidly sublime tune on which the singer threatens the woman with whom her man cheats. Here, Jones sings: “I’m gonna smile when I take your life.” Conversely, Happy Pills and Say Goodbye are cheery pop fare, on which the vocalist sings joyously about the break-up. Amid funky guitar grooves, Jones sounds playfully detached from said relationship. Therein lays the success of Little Broken Hearts. Unlike other disheartened recordings, some of which are more sullen than others, Jones never sounds too depressed on this set. Instead, she keeps the mood fairly moderate amongst Burton’s fluid soundtrack, setting the pace with a wry bravado that makes this album a dynamic listen, even if she’s dumping a guy. Heartbreak is inevitable if you love hard enough, yet Jones and Burton make it enjoyable.“ (Marcus J. Moore, BBC Review)
Norah Jones, vocals, guitars, bass, piano, organ
Brian Burton, guitars, bass, synthesizer, organ, piano, drums, percussion
Blake Mills, guitars
Dan Elkan, guitar
Todd Monfalcone, guitar
Gus Seyffert, bass, electric guitar, backing vocals
Heather McIntosh, bass, cello
Jonathan Hischke, bass
Joey Waronker, drums, percussion
Sonus Quartet, strings
Recorded in 2011 at Mondo Studio, Electro Vox Studios, Los Angeles, California
Engineered by Todd Monfalcone, Kennie Takahashi
Produced by Danger Mouse