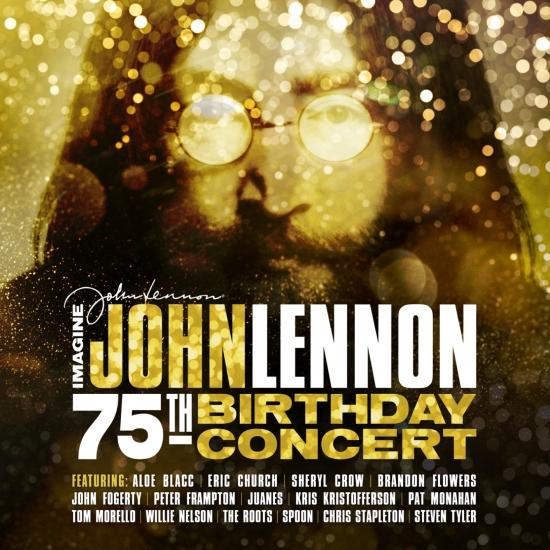 Imagine: John Lennon 75th Birthday Concert captured performances from the historic event at The Theatre At Madison Square Garden, honoring the songs of one of the most significant cultural figures of the 20th century. The concert film/audio recordings feature 20 performances of Beatles and solo classics by Aloe Blacc, Eric Church, Sheryl Crow, Brandon Flowers, John Fogerty, Peter Frampton, Juanes, Kris Kristofferson, Pat Monahan, Tom Morello, Willie Nelson, The Roots, Spoon + Chris Stapleton.
It’s beautiful to see so many wonderful and talented musicians come together for this special show to celebrate John’s birthday,” said Yoko Ono. “John’s art continues to give hope, light and happiness to generations of people everywhere. His belief that each of us can change the world continues to inspire the human race to believe in themselves, and his influence is everlasting in everyone’s hearts as we all share in the possibilities and power of music.”
“It would be impossible to quantify the immense impact John Lennon continues to have on modern culture,” said Keith Wortman of Blackbird Presents. “His music and lyrics continue to shape the lives of musicians and millions of fans around the world. I can’t think of any better way to celebrate his 75th birthday than to honor his legacy with this extraordinary event. It’s going to be an unforgettable evening.”
“We are proud to be associated with this special event, and to bring Imagine: John Lennon 75th Birthday Concert to AMC viewers,” said Joel Stillerman, president of original programming and development, AMC and SundanceTV. “We are continuing to explore unique opportunities in non-fiction programming and special events that can live alongside our original productions and movies, and we know this remarkable event will do just that and attract Lennon fans and music lovers of all ages.”