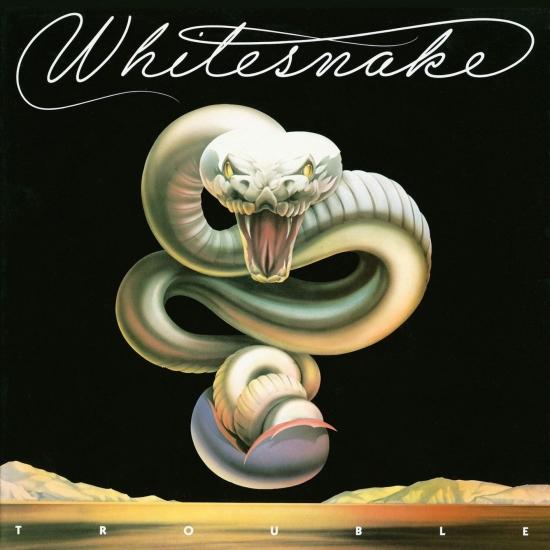 „Trouble was Whitesnake's first 'real' album, setting the template for virtually all of the band's ensuing career, pre-1987 American sellout. (Snakebite, released earlier that year, was split between David Coverdale solo sessions and actual group recordings.) This was a group made up of seasoned veterans after all, and they knew exactly what it was they wanted: edgy hard rock based on R&B.
They also knew who was boss: Coverdale, who after enduring a minority stake in the mighty Deep Purple, was now clearly established as top dog and de facto leader of the new outfit. (When he relinquishes lead vocal duties to guitarist Bernie Marsden on 'Free Flight,' it's because he wants to.) And what a slick, powerful outfit it was, too, with guitarists Marsden and Micky Moody compensating whatever visual shortcomings they may have had with their rock-solid six-string partnership, and former Purple organist Jon Lord holding it all together in the back.
'Take Me with You''s nonstop boogie and persistent slide guitar hook sets things into motion on a frenetic note, but it's the next song, 'Love to Keep You Warm,' which earns its stripes as a bona fide Whitesnake classic, largely due to its seductive, deliberate strut. In retrospect, concert fave 'Lie Down (A Modern Day Love Song)' is a tad too simplistic and has not aged well at all, but the pairing of 'Nighthawk (Vampire Blues)' and 'The Time Is Right for Love' provides an amazingly succinct look back (the first is built upon a very Purple-esque stop-start riff) and ahead (the second introduces a cool melodic recipe which would characterize the band's later-day sound). The title track represents the album's high-water mark, its rollicking blues shuffle declaring it a worthy successor to Coverdale's original tour de force with Purple, 'Mistreated.' A few unexpected oddities throw the album off-balance here and there, not least of which the instrumental jam 'Belgian Tom's Hat Trick' and an unexpected, stuttering cover of the Beatles' 'Daytripper,' but all things considered, it is easy to understand why Trouble turned out to be the first step in a long, and very successful career.“ (Eduardo Rivadavia)
David Coverdale, vocals
Micky Moody, guitar, backing vocals
Bernie Marsden, guitar, vocals
Jon Lord, keyboard
Neil Murray, bass
Duck Dowle, drums
Produced by Martin Birch
Digitally remastered