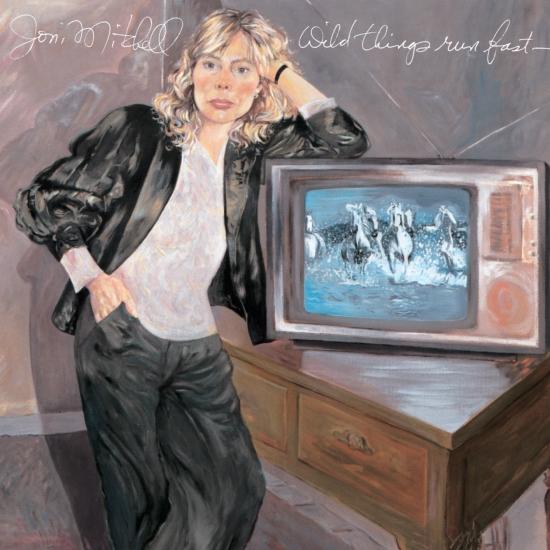 Wild Things Run Fast is the 11th studio album by Canadian singer-songwriter Joni Mitchell. Her first of four releases for Geffen Records, it was released in 1982 and represents her departure from jazz to a more 1980s pop sound. This was her first album to work with bassist Larry Klein, whom she married in 1982. Klein would play bass on and co-produce her next four albums.
Canadian Joni Mitchell is more than just another singer-songwriter: she was one of the most brave and pioneering female artists of the 20th century. Fiercely independent of outside pressures, she had no hesitation in taking artistic risks even when commercial success was at stake. Mostly, her risks paid off, as her relentless creativity kept fans loyal and won fulsome praise from music journalists.
Joni Mitchell, vocals; acoustic guitar on 3,5,9,10,11; electric guitar on 4,6,8; piano on 1; electric piano on 10
Larry Klein, bass, rhythmic arrangements on 2, 7
Michael Landau, electric guitar on 5,7,8,10
Steve Lukather, electric guitar on 1,2,9,11
John Guerin, drums on 1,4,6,9
Vinnie Colaiuta, drums on 2,3,5,7,8,10,11, rhythmic arrangements on 2,7
Don Alias, rhythmic arrangements on 6
Larry Williams, Prophet synthesizer on 1,2,3; tenor saxophone on 3,7
Russell Ferrante, Oberheim synthesizer on 4,6,9
Wayne Shorter, soprano saxophone on 4,6,11
Larry Carlton, guitar on 3
Victor Feldman, percussion on 9
Kim Hutchcroft, baritone saxophone on 7
Lionel Richie, backing vocals on 3,8
Charles Valentino, backing vocals on 3
Howard Kinney, backing vocals on 3
James Taylor, backing vocals on 9
Produced by Joni Mitchell
Digitally remastered

Ladies Of The Canyon (Remastered)

For The Roses (Remastered)

The Hissing Of Summer Lawns (Remastered)