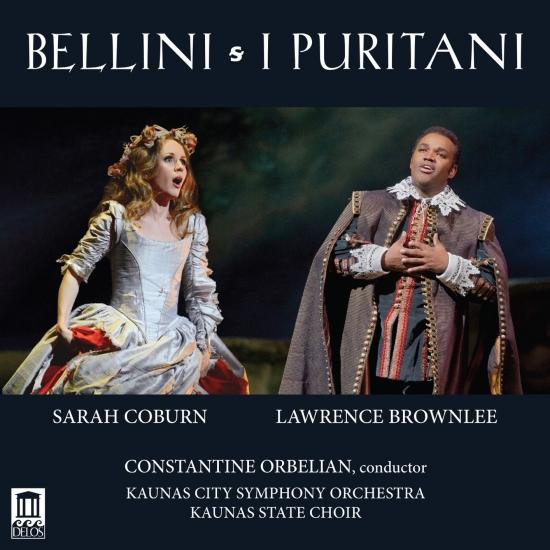 Info for Bellini: I puritani

This stunning recording of I Puritani, Vincenzo Bellini's bel canto masterpiece, features superstar singers Lawrence Brownlee and Sarah Coburn. Constantine Orbelian, New York City Opera’s Music Director and Principal Conductor, leads the superb Kaunas City Symphony and State Choir.
"In addition to the strong casting and excellent choral singing and orchestral playing, one of the things I admire most about Orbelian’s conducting is that he makes the opera sound all of a piece, as if he had conducted it sequentially from start to finish—which we know very well never happens in a recording studio." (The Art Music Lounge)
"An excellent new recording of I Puritani. Bellini gifted his four leads with some show-stopping music, none showier than the challenging arias that must be negotiated by the soloists: A te o cara and Credeasi misera (with a high F above high C, no less) both conceived for Rubini, the Italian tenor who, joined by Grisi, Tamburini and Lablache was part of the famed Puritani Quartet." (Rafael’s Music Notes)
Lawrence Brownlee, tenor
Sarah Coburn, soprano
Azamat Zheltyrguzov, baritone
Jovita Vaškevičiūtė, mezzo-soprano
Tadas Girininkas, bass
Liudas Norvaisas, bass
Kaunas State Choir
Kaunas City Symphony Orchestra
Constantine Orbelian, conductor 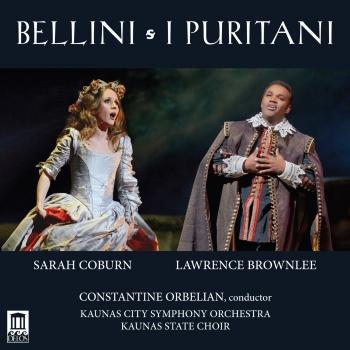 Constantine Orbelian
Grammy-nominated conductor Constantine Orbelian “stands astride two great societies, and finds and promotes synergistic harmony from the best of each.” (Fanfare) For over 20 years the brilliant American pianist /conductor has been a central figure in Russia’s musical life — first as Music Director of the Moscow Chamber Orchestra and the Philharmonia of Russia, and more recently as guest conductor with a number of illustrious Russian orchestras. Currently Chief Conductor of the Kaunas City Symphony Orchestra in Lithuania, Orbelian leads concerts and recordings there with some of the world’s greatest singers, in projects such as a recording of Simon Boccanegra, with Dmitri Hvorostovsky in the title role. In 2016 he became Artistic Director of the State Academic Opera and Ballet Theater in Yerevan, Armenia.
Opera News calls Orbelian “the singer’s dream collaborator,” and commented that he conducts vocal repertoire “with the sensitivity of a lieder pianist.” The California-based conductor tours and records with American stars such as Sondra Radvanovsky and Lawrence Brownlee, and with Hvorostovsky and other renowned Russian singers in European, North American, Russian and Asian music centers. He is the founder and Music Di- rector of the annual Palaces of St. Petersburg International Music Festival.
“Orbelian has star quality, and his orchestra plays with passion and precision,” The Audio Critic wrote of his acclaimed series of over 50 recordings on Delos. Among his concert and televised appearances are collaborations with stars Renée Fleming and Dmitri Hvorostovsky, and with Van Cliburn in Cliburn’s sentimental return to Moscow, the great pianist’s last performance. Orbelian’s frequent collaborations with Hvorostovsky include repertoire from their Delos recordings of universal sentimental songs Where Are You, My Brothers? and Moscow Nights, as well as their 2015 recording in the same series, Wait for Me. On several occasions Orbelian has conducted historic live telecasts from Moscow’s Red Square, with such artists as Hvorostovsky and Anna Netrebko.
Born in San Francisco to Russian and Armenian emigré parents, Constantine Orbelian made his debut as a piano prodigy with the San Francisco Symphony at the age of 11. After graduating from Juilliard in New York, he embarked on a career as a piano virtuoso that included appearances with major symphony orchestras throughout the U.S., U.K., Europe, and Russia. His recording of the Khachaturian piano concerto with conductor Neeme Järvi won “Best Concerto Recording of the Year” award in the United Kingdom.
Orbelian’s appointment in 1991 as Music Director of the Moscow Chamber Orchestra was a breakthrough event: he is the first American ever to become music director of an ensemble in Russia. A tireless champion of Russian-American cultural exchange and international ambassadorship through his worldwide tours, he was awarded the coveted title “Honored Artist of Russia” in 2004, a title never before bestowed on a non-Russian citizen. In May 2010, Orbelian led the opening Ceremonial Concert for the Cultural Olympics in Sochi — the first event setting the stage for Russia’s hosting of the Olympic Games in 2014. In 2012 the Consulate in San Francisco awarded him the Russian Order of Friendship Medal, whose illustrious ranks include pianist Van Cliburn and conductor Riccardo Muti, and which singles out non-Russians whose work contributes to the betterment of inter- national relations with the Russian Federation and its people.
From his 1995 performance at the 50th Anniversary Celebrations of the United Nations in San Francisco, to his 2004 performance at the U.S. State Department commemorating 70 years of diplomatic relations between Washington and Moscow, and a repeat State Department appearance in 2007, all with the Moscow Chamber Orchestra, Orbelian continues to use his artistic eminence in the cause of international goodwill. He and his orchestras have also participated in cultural enrichment programs for young people, both in Russia and the U.S. In 2001 Orbelian was awarded the Ellis Island Medal of Honor, an award given to immigrants, or children of immigrants, who have made outstanding contributions to the United States.

Booklet for Bellini: I puritani