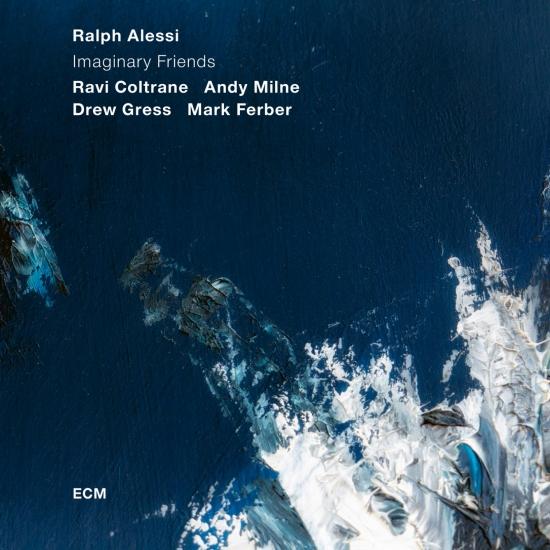 Trumpeter Ralph Alessi’s first two ECM albums as a leader – Baida (2013) and Quiver (2016) – justly earned him high praise. The New York Times lauded the “elegant precision and power” of Baida, while The Guardian extolled Quiver, pointing to the leader’s “flawless technique and ability to draw on jazz tradition while avoiding its clichés.” After those quartet discs, Alessi’s third ECM album, Imaginary Friends, presents him fronting a longtime working quintet in its first recording since 2010. Alessi’s bandmates include a kindred spirit in saxophonist Ravi Coltrane, a studio and stage partner of the trumpeter’s since they were students together at the California Institute of the Arts in the late ’80s. They are joined by pianist Andy Milne and drummer Mark Ferber, both making their ECM debuts, plus bassist Drew Gress, who played on Baida and Quiver. The nine Alessi compositions of Imaginary Friends include an irresistible highlight in “Iram Issela” (the title being his 8-year-old daughter’s name spelled backward). The track’s rich seam of bittersweet melody – and exceptional soloing by Coltrane – sets the scene for an album of quicksilver beauty.
Alessi – after recording his first ECM album at New York’s Avatar and his second at Oslo’s Rainbow – convened his quintet for Imaginary Friends in France at La Buissonne, Pernes-les-Fontaines (where the trumpeter had previously worked as part of the ensemble for pianist Florian Weber’s label debut as a leader, Lucent Waters). Alessi and company joined ECM founder Manfred Eicher in the studio after more than a dozen performances across Europe, with the trumpeter’s compositions “developing on tour,” he recalls. “We had hit the music hard on the road and were hot when we got in there with Manfred. We were confident with the material, relaxed but focused – the vibe was great.”
Working with Eicher has inevitably influenced Alessi’s manner of music-making, he says: “The sound of the records and the general aesthetic vision has inspired a certain side of me. Manfred encourages you to respect the space in the music, and that approach resonates with me, and pulls the band in, too. We slow down a bit and make the most of the space within the music, resisting the natural urge to fill up every space with notes. It isn’t easy to do – it requires a certain discipline.”
Over the past decade and a half, Alessi’s working quintet has often gone by the moniker This Against That, with this version of the lineup making two previous albums together and touring extensively. The trumpeter has a particularly strong relationship with Coltrane, since becoming friends as students. “It has been a wonderful thing witnessing Ravi mature as a musician,” Alessi says. “He has such a beautiful sound, with a distinctive voice on the instrument – not an easy thing on the tenor sax, in particular. He has acquired a new level of depth in recent years and sounds great on this new album, so centered and free in the way he expresses himself on the horn. Ravi plays such a moving solo on ‘Iram Issela’ that it brought tears to my eyes. His patient, unhurried manner of playing has also been inspiring, with his sense of phrasing and rhythmic vocabulary bringing something out of me that I really like. Where we solo together on the album’s title track was an especially great studio moment.”
Alessi played with Milne in saxophonist Steve Coleman’s band in the mid-’90s. “Andy is such a dynamic pianist,” the trumpeter says. “Those days playing very rhythmic music in Steve’s band only scratched the surface of what he could do. He can also create such a meditative feel with his soloing, like in ‘Iram Issela’ and ‘Melee,’ for instance. He has a way of being focused and taking his time with an idea, and that’s something I’m always drawn to in a player. At the end of the record, we included a brief duet with the two of us, just playing through the melody in a rubato fashion. He can be more grooving, too, of course, as in ‘Fun Room.’ Andy also adds a prepared-piano element to the album, subtly expanding the sound of a track like ‘Pittance’.”
Ferber leads off “Fun Room” with a rolling, richly musical drum solo, while a ruminative Gress arco solo helps color “Imaginary Friends.” As a rhythm battery in tandem, “Drew and Mark’s musicianship and command of the music are always rock solid,” Alessi explains, “and their level of listening could hardly be more profound – the radar is always on with those two.”
Born in 1963, Alessi himself has long been renowned as a musician’s musician, a first-call New York trumpeter who can play virtually anything on sight and has excelled as an improviser in groups led by not only Coleman, Coltrane and Weber but also the likes of Uri Caine and Don Byron, along with duetting with Fred Hersch and leading his own groups. Over the past half-decade, Alessi’s prolific composing has ripened, and he has only evolved further as a trumpeter, his gorgeous sound floating expressively above the band or slicing dynamically through it. DownBeat described his playing this way: “Alessi works between the notes, his thoughtful, conversational solos as meditative as a calligrapher’s art, each line free-flowing and declarative but with immaculate shape and beauty.” Praising his abilities as a leader, LondonJazz said: “Alessi’s stock-in-trade is to make the angularities and asymmetries of complex tunes sound natural, to assert their logic, to lead. There is always a sense of direction.”
Reflecting on the making of Imaginary Friends alongside Coltrane, Milne, Gress and Ferber, Alessi concludes: “After all these years of being friends and playing in this band and various others together, it’s great to have arrived at a moment when we could make a record like this for ECM.”
Ralph Alessi, trumpet
Ravi Coltrane, tenor and sopranino saxophone
Andy Milne, piano
Drew Gress, double bass
Mark Ferber, drums