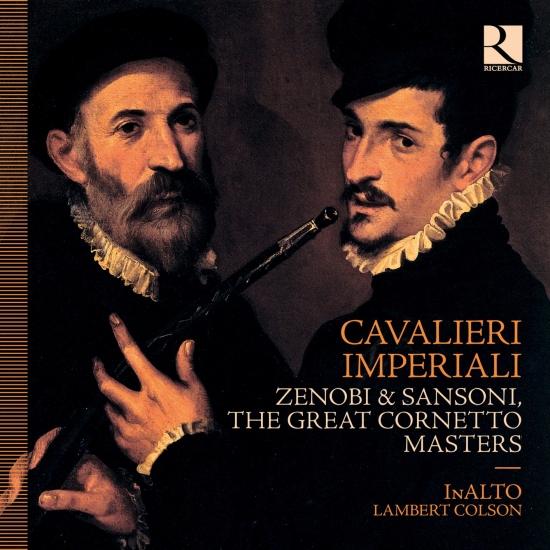 Luigi Zenobi, a virtuoso cornettist known as ‘Luigi del cornetto’, was born in Ancona in the mid-sixteenth century. He later moved to Vienna, where he entered the service of the Emperor Maximilian II. His reputation grew and he subsequently worked for the Este family in Ferrara, where he was the most respected and best-paid musician at court up to that time, so sought-after were his talents. Luigi was also a painter, poet, miniaturist and music scholar. An eyewitness recalled the delicacy of his playing: ‘softer than the harpsichord when its lid is closed’. Giovanni Sansoni, a composer and cornettist probably originally from Venice, was born around 1593. He was engaged by Archduke Ferdinand of Austria in Graz in 1613 and followed him to Vienna when he became Emperor in 1619. He sent his compositions to Saxony, and the young Schütz sent him former choirboys to be taught the cornett and the bassoon, two instruments on which he was an absolute master. Sansoni became the inspiration for the great instrumental composers of the first half of the seventeenth century in Vienna.
Our two legends of the cornett have one thing in common: they were both knighted by an emperor, Zenobi even calling himself ‘Cavaliere del cornetto’.
InAlto
Lambert Colson, direction
Pierre Gallon, harpsichord 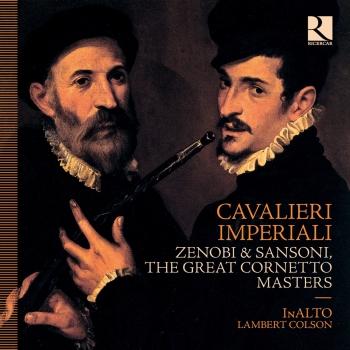 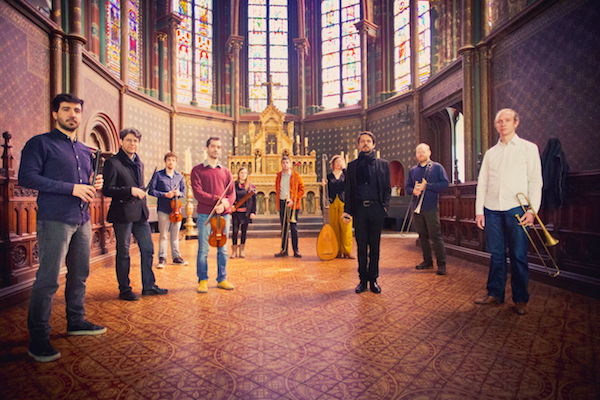 InAlto
This Italian expression applies the same adjective to sea and mountain; it evokes at the same time their physical remoteness and the risks involved when exploring them.
The cornetto is definitely one of the most important musical instruments of the 16th and 17th century. It is made of wood and covered with leather or parchment and was considered the instrument most capable of imitating the human voice. And, just like the voice, it likes to explore the higher regions. Mersenne’s encyclopedia describes the cornetto as a “ray of light going through the clouds”.
InAlto aims to explore both vocal and instrumental music, bringing them to a sort of dialogue.
Famous composers of the baroque in Europe such as Monteverdi, Schütz or Praetorius left us magnificent music cultivating this taste for risk taking, this worship of the high register.
Nowadays, a real danger exists of failing to convince with music that does not feel like ours anymore. By a thorough study of the available sources and by selecting the best “historically informed” partners and collaborators, InAlto seeks to bring out the best in the repertoire they play. Eventually, historical musical intruments are musical instruments as well, InAlto considers them as modern tools of expression.
Lambert Colson
received his musical training at the Royal Conservatory of Brussels under Françoise Defours, Pedro Memelsdorff, Bart Coen, Marleen Leicher, Bruce Dickey and Gebhard David. He also studied in Bremen (University of the Arts), Basel (Schola Cantorum Basiliensis), and Barcelona (ESMUC). He has worked with ensembles and conductors of the calibre of Les Talens lyriques (Christophe Rousset), Le Parlement de Musique (Martin Gester), Scherzi Musicali (Nicolas Achten), Les Paladins (Jérôme Correas), L’Echelle and Oltremontano. As a musician and researcher, he has contributed to journals including La pensée de midi (Editions Actes Sud), and is involved with the Royaumont Foundation, where he teaches on Lutheran music in the Holy Roman Empire and assists the composer Zad Moultaka.
Several contemporary composers, including Zad Moultaka, Fabrice Fitch und Bernard Foccroulle, have been inspired by Lambert’s boundless enthusiasm for learning more about his instrument to dedicate pieces to him. His interest in innovative joint projects led Lambert to discover hypnosis while working with the choreographer Catherine Contour.
In cooperation with artists such as Liesa van der Aa and Shara Worden, BOX allows him to explore the range of possibilities open to his instruments in popular music.
This fervent commitment to being a musician in tune with his time clearly motivates the search for musical and emotional cross-fertilisations Lambert and InAlto have embarked on.