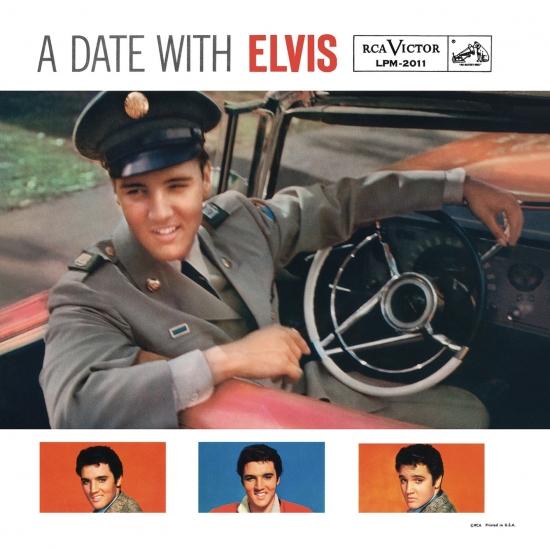 Info for A Date With Elvis (Mono Remastered)

Good products are worth their weight in gold when times are a little harsh – and this album was certainly a genially placed stopgap. In 1959, at the time when RCA launched this record on the market, the label’s shining rock star was out of the country doing his military service in good old Germany. In order to comfort all his fans during his forced absence, the record bosses produced an album with a smartly uniformed Elvis on the cover, smiling widely to let his faithful followers know that he’d be back soon. There was a special calendar too, so that his fans could count off the days until his return. This marketing ploy was extremely successful. The record became a highly desirable collector’s item and even years later illegal dollars still flowed from pirate copies.
The RCA producers kept mum about when and where the tracks were recorded. But who cares about that when listening to Elvis giving the 'blue grass' classic "Blue Moon Of Kentucky" his unmistakable, rockabilly sound? The other titles, all of them performed by a well-proven ensemble of rock-’n’-roll musicians, are filled with the honest, powerful language of the young – or from today’s viewpoint, old – Elvis. Which takes us back full circle to the date. What better way is there to celebrate the 50th birthday of rock-’n’-roll than with this early album by its 'King'?
Elvis Presley
Recorded July 1954 in mono at Memphis Recording Service, Memphis, Tennessee (USA), and other venues till 1957
Digitally remastered