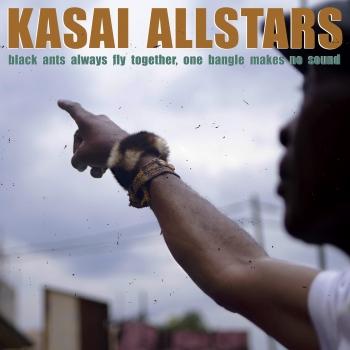 Black Ants Always Fly Together, One Bangle Makes No Sound 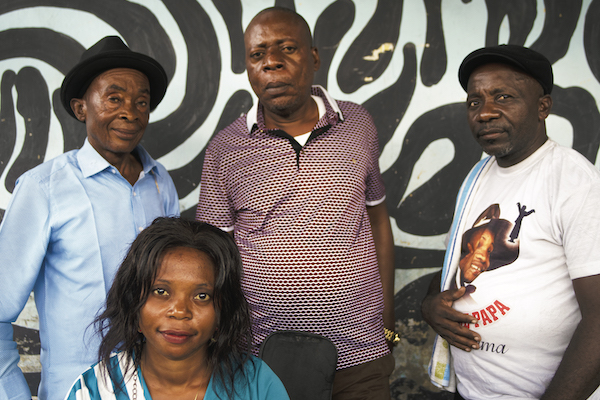 Kasai Allstars
is a collective which regoups members from several other bands, including Masanka Sankayi and Basokin. They all originate from Kasai (a Congolese province of the size of France), but come from very diverse musical traditions, such as the Luba and the Lulua, which were thought to be incompatible until these musicians decide to put their resources together and form this "supergroup".
After recording several tracks for the Congotronics 2 album ("Buzz'n'Rumble from the Urb'n'Jungle"), Kasai Allstars went on to record and release the acclaimed album "In The 7th Moon, The Chief Turned Into A Swimming Fish And Ate The Head Of His Enemy By Magic", which became a big cult album in the electronic and indie rock communities, all around Europe, the US and Japan.
Kasai Allstars toured several times in Europe. Their live show is really something not to be missed. The wild, driving rhythms and exhilarating vocals are as exciting as those heard on their albums, and are further enhanced by spectacular dancing.
In November 2010, Crammed Discs released "Tradi-Mods Vs. Rockers", a multi-artist album containing interpretations, covers and tributes to the music of Kasai Allstars, Konono No1 and other Congotronics bands, recorded by 26 indie rock and electronic musicians. The following artists chose to record reworks or original tributes to the music of Kasai Allstars: Deerhoof, Animal Collective, Juana Molina, Shackleton, Aksak Maboul, Lonely Drifter Karen, Jolie Holland, Woom and Bass Clef.
In 2011, Kasai Allstars took part in the Congotronics vs Rockers project, a "superband" including ten Congolese and ten indie rock musicians (also including members of Deerhoof, Wildbirds & Peacedrums, Konono no.1, Skeletons and Juana Molina), who collaborated to create a common repertoire and performed at 15 major festivals and venues in ten countries.
Kasai Allstars released "Beware The Fetish" in 2014, a 2CD collection of over 100 minutes of wild, trance-inducing, raw intensity, which probes deeper into the musicians' repertoires and styles, with the help of a large array of guests.
In 2017, the band wrote and performed most of the soundtrack for Alain Gomis' award-winning feature film "Félicité", and appears onscreen playing their own part. Muambuyi's voice is omnipresent, and is being heard everytime the film's protagonist Félicité (played by Congolese actress Vero Tshanda) sings in the bars of Kinshasa, backed by KasaÏ Allstars.The film was presented in competition at the Berlin International Film Festival 2017, where it obtained the Silver Bear Grand Jury Prize.
The soundtrack album came out in 2017 and also features three tracks by Orchestre Symphonique Kimbanguiste, as well as a series of bonus remixes, by the likes of Daedelus, Clap! Clap!, Ekiti Sound, Africaine 808 & more.