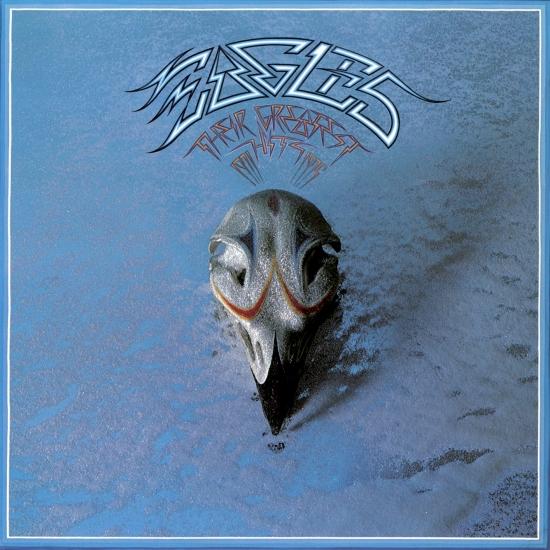 These songs sum up a time-the early '70s-and a place-southern California-better than just about anything could. Take It Easy; Witchy Woman; Already Gone; One of These Nights; Take It to the Limit; Peaceful, Easy Feeling; Desperado; Best of My Love and more.
First album ever to be awarded a Platinum Disc, it was certified at 29× Multi Platinum on 30 January 2006 and has sold over 42 million copies worldwide to date. The album is listed at #2 on the RIAA's 'Top 100 Albums'.
„On their first four albums, the Eagles were at pains to demonstrate that they were a group of at least near-equals, each getting a share of the songwriting credits and lead vocals. But this compilation drawn from those albums, comprising the group's nine Top 40 hits plus 'Desperado,' demonstrates that this evenhandedness did not extend to singles -- as far as those go, the Eagles belong to Glenn Frey and Don Henley. The tunes are melodic, and the arrangements -- full of strummed acoustic guitars over a rock rhythm section often playing a shuffle beat, topped by tenor-dominated harmonies -- are immediately engaging. There is also a lyrical consistency to the songs, which often concern romantic uncertainties in an atmosphere soaked in intoxicants. The narrators of the songs usually seem exhausted, if not satiated, and the loping rhythms are appropriate to these impressions. All of which means that, unlike the albums from which they come, these songs make up a collection consistent in mood and identity, which may help explain why Their Greatest Hits (1971-1975) works so much better than the band's previous discs and practically makes them redundant. No wonder it was such a big hit out of the box, topping the charts and becoming the first album ever certified platinum. Still, there must be more to it, since the album wasn't just a big hit, but one of the biggest ever, becoming one of the very few discs to cross the threshold of 20 million copies and competing for the title of best-selling album of all time. There may be no explaining that, really, except to note that this was the pervasive music of the first half of the 1970s, and somehow it never went away.“ (William Ruhlmann, AMG)
Glenn Frey, vocals, guitars, piano
Bernie Leadon, guitars, banjo, pedal steel guitar, mandolin, backing vocals
Randy Meisner, vocals, bass guitar
Don Henley, vocals, drums
Don Felder, guitars, backing vocals
Produced by Glyn Johns, Bill Szymczyk
Digitally remastered