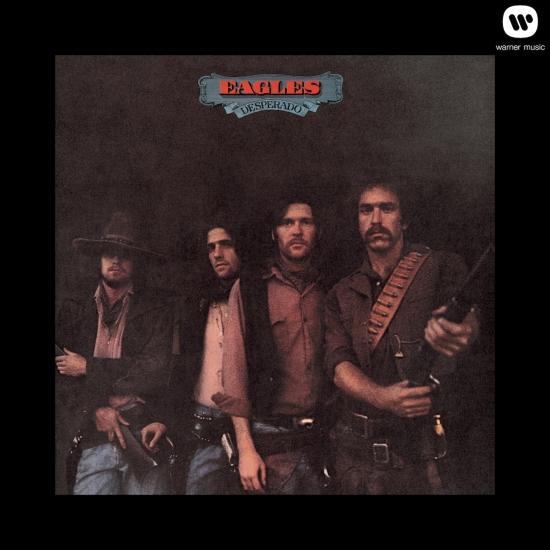 The Eagles' excellent debut indicated that they were quickly on their way to becoming one of America's leading country-rock acts. 'Desperado', their second release, ostensibly a concept album about an outlaw figure of the Old West, furthered their claim. Recorded in London under the aegis of Glyn Johns, the set was marked by the quartet's highly measured playing, distinctive, high-flown harmonies, and accessible folk and country-flavored pop-rock.
'Desperado' may not be as cohesive as its predecessor, but the different styles it encompasses mirror the Eagles' many strengths. 'Twenty-one' is Flying Burrito Brothers-style country-rock, 'Out of Control' is amped-up blues-rock, whereas the title track is a plaintive, melancholic piano ballad (abetted by a string section).
Don Henley plays a bigger part on 'Desperado', lending vocals and co-writing much of the material, including the opener 'Doolin Dalton' and the lazy, beautiful 'Tequila Sunrise,' the record's single. The Eagles' sophomore album showed them developing their signature style, and achieving the radio-friendly sheen they would refine over the next two albums, then perfect on 1976's 'Hotel California'.
Although the title track is one of the Eagles' signature songs, it was never released as a single. The song 'Desperado' was ranked #494 on Rolling Stone's 2004 list of 'The 500 Greatest Songs of All Time'. The album did yield two singles, though: 'Tequila Sunrise' and 'Outlaw Man'. Those two singles reached #64 and #59 respectively. The album reached #41 on the charts and sold 2 million copies.
'...a unified set of songs...with their second consecutive job well done, the Eagles are on a winning streak...' (Rolling Stone)
Glenn Frey, guitars, keyboards, piano, harmonica, vocals
Don Henley, drums, percussion, acoustic guitar, vocals
Randy Meisner, bass guitar, acoustic guitar, vocals
Bernie Leadon, guitars, mandolin, banjo, vocals
Produced and engineered by Glyn Johns
Digitally remastered