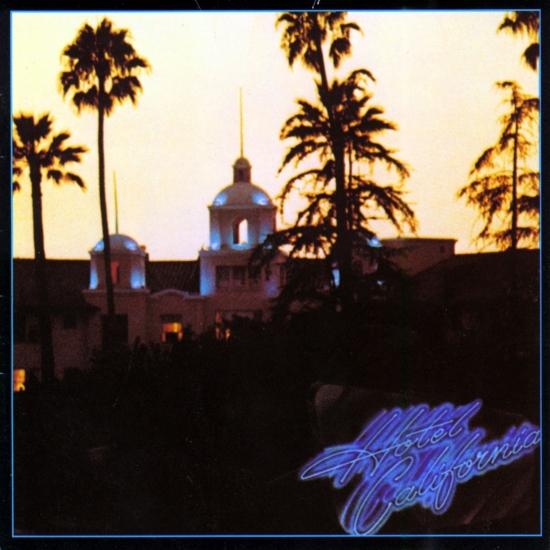 Hotel California was arguably the band's best single album - it was certainly the Eagles' biggest original disc - and it also underscored the band's need to make a big statement. The title tune reflected the album's theme of paradise lost in California, painting this picture with a musical arrangement that punctuated strumming guitars with dramatic drums, and perhaps the band's most famous lyric: You can check out any time you like, but you can never leave. New Kid in Town was an equally fine albeit much more traditional Eagles ballad. Life in the Fast Lane aspired to hard rock but largely gunned its engine without taking off. The rest is okay, but nothing more than secondary Eagles songs that happened to be nestled into the album that came to define the `70s supergroup.
In pursuit of note-perfect Hollywood-cowboy ennui, the Eagles spent eight months in the studio polishing take after take after take. As Don Henley recalled, 'We just locked ourselves in. We had a refrigerator, a ping-pong table, roller skates and a couple of cots. We would go in and stay for two or three days at a time.' With guitarist Joe Walsh replacing Bernie Leadon, the band backed off from straight country rock in favor of the harder sound of 'Life in the Fast Lane.' The somber 'New Kid in Town' ponders the fleeting nature of fame, and the title track is a monument to the rock-aristocrat decadence of the day and a feast of triple-guitar interplay. 'Every band has their peak,' Henley said. 'That was ours.' (Rolling Stone Magazine)
The Eagles took 18 months between their fourth and fifth albums, reportedly spending eight months in the studio recording Hotel California. The album was also their first to be made without Bernie Leadon, who had given the band much of its country flavor, and with rock guitarist Joe Walsh. As a result, the album marks a major leap for The Eagles from their earlier work, as well as a stylistic shift toward mainstream rock. An even more important aspect, however, is the emergence of Don Henley as the band's dominant voice, both as a singer and a lyricist. On the six songs to which he contributes, Henley sketches a thematic statement that begins by using California as a metaphor for a dark, surreal world of dissipation; comments on the ephemeral nature of success and the attraction of excess; branches out into romantic disappointment; and finally sketches a broad, pessimistic history of America that borders on nihilism. Of course, the lyrics kick in some time after one has appreciated the album's music, which marks a peak in The Eagles' playing. Early on, the group couldn't rock convincingly, but the rhythm section of Henley and Meisner has finally solidified, and the electric guitar work of Don Felder and Joe Walsh has arena-rock heft. In the early part of their career, The Eagles never seemed to get a sound big enough for their ambitions; after changes in producer and personnel, as well as a noticeable growth in creativity, Hotel California unveiled what seemed almost like a whole new band. It was a band that could be bombastic, but also one that made music worthy of the later tag of 'classic rock,' music appropriate for the arenas and stadiums the band was playing. The result was The Eagles' biggest-selling regular album release, and one of the most successful rock albums ever.
Don Henley, vocal & drums
Don Felder, guitar & vocals
Glenn Frey, guitar, vocals & keyboards
Joe Walsh, guitar, vocals & keyboards
Randy Meisner, bass & vocals
Producer: Bill Szymczyk
Recorded at Criteria Studios, Miami & The Record Plant, Los Angeles.
Mixed in Miami.
Engineers: Allan Blazek, Bill Szymczyk, Bruce Hensal, Ed Mashal
CCD Mastering by WCI Record Group.