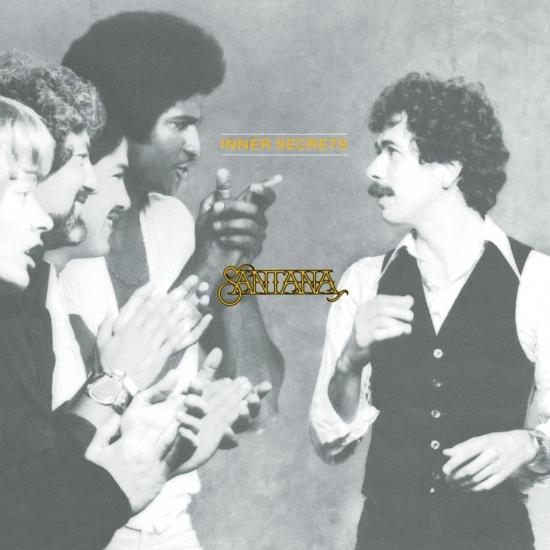 On the heels of „Festival“ came the disco-soul-pop-spiced „Inner Secrets“, with a whole new Santana lineup. Greg Walker is the main man at the microphone this time around on these upbeat, radio-friendly cuts. While the band's personnel and sound are consistently in a state of flux and evolution, two constants in Santana are the presence of positive messages and, of course, founding guitar hero Carlos Santana--albeit the focus of this particular recording is much less on his playing and more on the overall production.
"Move On" stomps along with a thumping rock pulse, funky clavinet, and harmonized verses that quote the illustrious Sly Stone with the always-encouraging line, "You Can Make It if You Try." "One Chain (Don't Make No Prison)" bounces along in similar fashion, with an uplifting, soulful delivery by Walker and a cowbell-lined guitar riff that inspires rump shaking or perhaps...aerobics. There are some tasty cover tunes, too, ranging from the vivid '70s pop gem "Stormy" to a smooth-grooving version of Traffic's piquant anthem of the neighborhood narco-badman, "Dealer."
Greg Walker, lead vocals
Carlos Santana, guitar, backing vocals
Chris Solberg, guitar, backing vocals
Chris Rhyne, keyboards
David Margen, bass
Graham Lear, drums
Armando Peraza, congas, percussion, backing vocals
Raul Rekow, congas, percussion, backing vocals
Pete Escovedo, timbales, percussion
Recorded from July - August 1978 at Western Recorders, Los Angeles, California
Engineered by Matt Hyde
Mastered at The Mastering Lab, Los Angeles, California
Produced by Brian Potter, Dennis Lambert
Digitally remastered