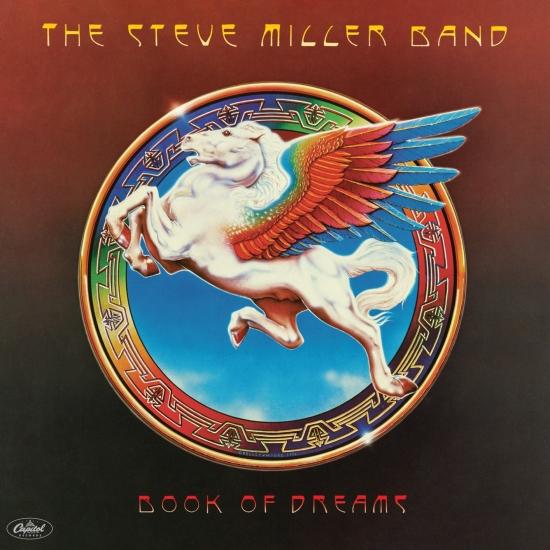 Info for Book Of Dreams (Remastered)

A recording artist since 1968, Miller made eight albums for Capitol, culminating with “The Joker”, before recording the multi-million selling “Fly Like An Eagle” in 1976.
In May 1977, Steve followed this up with the album “Book Of Dreams”, another multi-million seller all around the world. The album was recorded at the same sessions as “Fly Like An Eagle” and features the hit singles “Jet Airliner”, “Jungle Love” and “Swingtown”.
The album starts off with “Threshold”, a minute-long, pure synth-effect track which almost sounds like a distant air patrol alarm and acts as defacto into for “Jet Airliner” (in fact, most classic radio stations play these songs together). “Jet Airliner” was composed by Paul Pena for his album in 1973, but when that artist encountered label problems the album and song went unreleased. The song was presented to Miller by a former band mate and Miller developed it using a variation of Eric Clapton’s guitar riff on Cream’s version of “Crossroads”. This method of using a synth-heavy piece to introduce a proper song was commonplace with Miller during this era as he did the exact same thing to start off Fly Like An Eagle and uses this method again later on Book of Dreams with “Electro Lux Imbroglio” and “Sacrifice”.
"It is here, on this 1977 blockbuster, that Steve Miller shored up his "Space Cowboy" moniker and cosmic persona: from the winged horse on the album cover to a judicious smattering of synthesizers in the music, Book of Dreams bridged the gap between blues-rock and the indulgences of prog rock. Things do go awry when Renaissance Faire whimsy takes over clunkers like "Wish Upon a Star" and "Babes in the Wood," but luckily the balance of the record offers a satisfying blend of meaty blues and country riffs and tasteful atmospherics. The well-known suspects include "Swingtown," "Winter Time," and "Threshold," with relatively straightforward rock & boogie highlights coming by way of "True Fine Love," "Jet Airliner," and "Jungle Love." The non-hit cuts, "Sacrifice" and "My Own Space," do stand up to these FM favorites but fall short of making the album something the casual fan should consider with Miller's Greatest Hits 1974-1978 in hand (that collection includes seven tracks off of Book of Dreams, plus all the hits from The Joker and Fly Like an Eagle). Still, this is a highlight of the '70s classic rock era and one of Miller's finest releases." (Stephen Cook, AMG)
Steve Miller, vocals, guitar, synthesizer, sitar
David Denny, guitar
Greg Douglass, slide guitar
Byron Allred, piano, synthesizer
Lonnie Turner, bass
Gary Mallaber, drums, percussion
Additional musicians:
Norton Buffalo, harmonica on "Winter Time" and "The Stake"
Les Dudek, lead guitar on "Sacrifice"
Kenny Johnson, drums on "Sacrifice"
Jachym Young, piano on "Sacrifice"
Charles Calamise, bass on "Sacrifice"
Curley Cooke, acoustic guitar on "Sacrifice"
Bob Glaub, bass on "Winter Time"