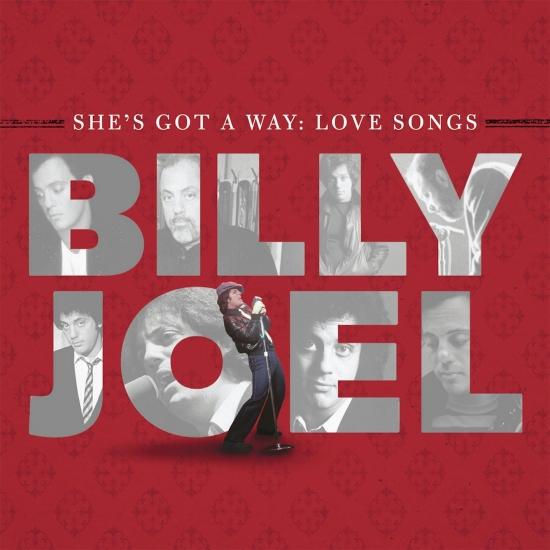 Info for She's Got A Way: Love Songs

She's Got A Way: Love Songs is a perfect distillation of the artist's expressions of love and romance over the course of his life and career. The album brings together some of Billy's finest and most heartfelt performances, iconic hits playing alongside under-appreciated deep catalog selections.
She's Got A Way: Love Songs are the love songs, ballads and sentimental favorites comprising a dream Billy Joel playlist for old and new romantics alike, bringing new context to classics like 'Just the Way You Are,' 'Honesty' and 'She's Always a Woman' while rediscovering forgotten masterpieces like 'Travelin' Prayer' (the b-side of the 'Piano Man' single), Billy's version of 'Shameless' (a #1 country smash for Garth Brooks), and the haunting instrumental 'Nocturne' (from 1971's Cold Spring Harbor).
„As one of the biggest-selling artists of all time, perhaps it was only a matter of time before Billy Joel was subjected to a romantically themed collection, and so came She's Got a Way: Love Songs, released just in time for Valentine's Day 2013. This 18-track collection reveals an odd truth about Joel: he didn't write all that many love songs. A few of his biggest hits are love songs but only a few: the early song 'She's Got a Way,' which wasn't a hit until its Songs in the Attic incarnation in the early '80s; 'Just the Way You Are,' an unabashedly romantic soft rock staple that helped make him a star in the mid-'70s; 'This Is the Time,' a gently nostalgic song from The Bridge; 'The Night Is Still Young,' an added cut to 1986's Greatest Hits, Vols. 1 & 2. And that's about it. Other hits here aren't really love songs -- 'She's Always a Woman' is too nasty to be romantic ('she'll carelessly cut you and laugh while you're bleedin''), 'Honesty' isn't about love, nor is 'An Innocent Man' -- and that's why this compilation relies so heavily on album tracks, usually from early Billy Joel albums. That is where Joel wrote about love, when he had a 'Travelin' Prayer' and declared to his lover 'You're My Home.' He had other love songs later, including 'Shameless,' which Garth Brooks turned into a standard, but the overall impression left by She's Got a Way is that love songs are not Billy's forte. Which isn't to say this isn't an enjoyable collection: there are many good songs here -- all the aforementioned tunes, along with 'Until the Night' -- and it's a good collection of Joel's moodier, slower, melodic numbers. It just doesn't quite deliver on the romance it promises.“ (Stephen Thomas Erlewine, AMG)
Produced by Bruce Dickinson
Digitally remastered