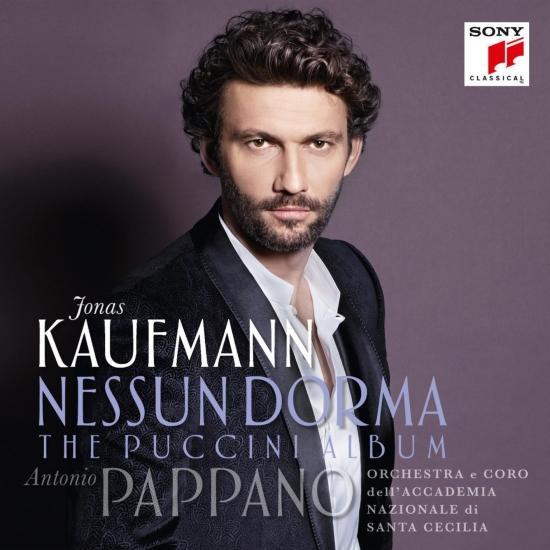 Described by The Daily Telegraph as “The world’s greatest tenor”, Jonas Kaufmann dedicates his new album to the most popular Italian opera composer of all time, Giacomo Puccini. Featuring the most loved aria of all time, ‘Nessun Dorma’, alongside stunning pieces from Manon Lescaut, La Boheme, Tosca and more. Together with Jonas Kaufmann, this album includes celebrated Royal Opera House conductor Antonio Pappano and his renowned orchestra and choir of the Accademia Nazionale Di Santa Cecilia.
After years of singing Giacomo Puccini’s heroes on stage to vast critical and audience acclaim, Jonas Kaufmann finally records an album entirely devoted to the world’s most-loved opera composer. His new album Nessun dorma will be released on Sony Classical on September 11, 2015 and will include a selection of the composer’s stupendous tenor arias drawn from Puccini’s greatest operas, including Turandot, Manon Lescaut, Tosca, La Bohème, Madama Butterflyand La fanciulla del West, among others.
Spanning the breadth of Puccini’s output from the early operas Le Villi and Edgar, the album culminates in the mighty aria “Nessun dorma” from his final opera Turandot. Jonas Kaufmann is joined on this album by Maestro Antonio Pappano, the Orchestra dell’ Accademia Nazionale di Santa Cecilia, and soprano Kristīne Opolais.
This fall, Jonas Kaufmann will embark on a European tour with this repertoire performing in Frankfurt, London, Paris, Brussels, Prague and Mannheim. The tour continues in spring 2016 with dates in Essen and Munich. In September 2015, Jonas Kaufmann will also make his first appearance at the “Last Night of the Proms” at the Royal Albert Hall, London, broadcast to millions as part of the world-famous finale of the BBC Proms. Along with a selection of Puccini arias, Jonas will also sing “Rule, Britannia!” – which, according to records, will be the first time this song has been performed by a German singer in the concert’s history.
Puccini’s music made a deep impression on Jonas Kaufmann from an early age, as it has done on many people. But few people are aware of the unparalleled popularity the composer enjoyed in his own lifetime and how this fame came about. As Jonas explains: “Nowadays every-one knows ‘Nessun dorma’ – not least as a result of the legendary first concert given by the Three Tenors on the eve of the FIFA World Cup final in Rome in 1990. But during the last twenty years of his life Puccini was already as famous as Madonna is today. His arias were such popular hits that everyone knew them – at the beginning of the 20th century he was the composer who captured the hearts of each and every one of his listeners.”
A century ago the arias from Puccini’s operas were whistled in the streets. Millions of listeners from every walk of life were moved to tears by La Bohème and Madama Butterfly. His music had mass appeal and was accessible to and loved by all. Puccini had a gift for reaching out to all the men and women of the modern world. His operas no longer contain heroes of a Verdian stamp, which i
Puccini’s music became even more popular than Verdi’s thanks to Enrico Caruso and the invention of the gramophone record. It was the legendary Italian tenor who turned the record into a medium of mass communication. Everyone who owned a gramophone knew who Caruso was, and everyone who listened to Caruso also listened to Puccini. By the standards of his time, Puccini earned as much as Hollywood stars today and he lived the high life. Jonas Kaufmann regards it as a stroke of luck that he was able to record his Puccini album in Rome: “First, I love the city. Second, it is here that the wonderful Orchestra dell’Accademia Nazionale di Santa Cecilia performs. Third, the orchestra’s principal conductor is Antonio Pappano, to whom I owe many hours of happiness on the operatic stage. I was also extremely lucky that Kristīne Opolais, my partner in two stage productions of Manon Lescaut, was able to record a number of scenes with me.”
“No aria is as loved today as ‘Nessun dorma’. The legendary first concert of the Three Tenors took place only a few days before my twenty-first birthday, and I really envied Luciano Pavarotti, Plácido Domingo and José Carreras for this hit of theirs. For a long time I didn’t dare sing ‘Nessun dorma’ myself, since I was so in awe of the aria’s magic and its incredible appeal. Even today, whenever I hear and sing this aria, I still get goosebumps.”
Jonas Kaufmann, tenor
Kristīne Opolais, soprano (on tracks 2, 3, 7, 15)
Massimo Simeoli, baritone (on tracks 9, 11) Antonio Pirozzi, bass (on tracks 4, 8, 15) Orchestra dell’ Accademia Nazionale di Santa Cecilia
Maestro Antonio Pappano, conductor