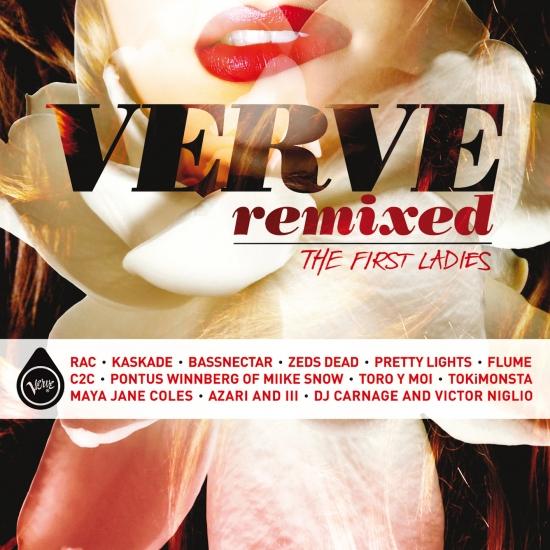 The groundbreaking Verve Remixed series is back with Verve Remixed: The First Ladies, set for release July 16th on Verve Records. The all female compilation features 13 classic jazz tracks remixed by some of today’s most acclaimed DJs and producers. Billboard has called Verve Remixed “one of the most successful brands in dance/electronic music” and it is considered by many to be the best remixed series of all time.
Verve Remixed: The First Ladies features tracks by legendary female artists including Ella Fitzgerald, Nina Simone, Billie Holiday, Sarah Vaughan and Dinah Washington. Marlena Shaw, Astrud Gilberto and Sister Rosetta Tharpe also have timeless songs included on the record.
“Nina Simone makes me smile, cry, laugh and have a deeper sense of understanding myself all at the same time. Add to that, nearly every one of her songs has that kind of power. The ability to channel and express that kind of raw, spirit shaking soul every time she sings a song is, in my experience, incredibly rare,” said Derek Vincent Smith (aka Pretty Lights). “I don’t think I’ve ever really said this, but when I really think about it, there is no musician in all of time that has affected me like her. Real talk. The opportunity to remix her song, ‘I Put A Spell On You’ was an awesome opportunity and an indescribable experience. I hope I can do it again.”
The original tracks have been remixed by 13 of the hottest producers and DJs including Zeds Dead, the Toronto based dubstep group, Kaskade, widely considered one of the most influential names in modern electronic music, critically acclaimed indie artist Toro Y Moi, electro hip-hop soul performer Pretty Lights and Bassnectar, one of the highest profile DJs in the U.S.
Verve Remixed, a compilation series created by Verve Records, brings the greatest producers and DJs today to create remixes of classic Verve jazz tracks. The series has sold close to 1 million tracks worldwide, resonating both with fans of the original recordings and with a new untapped fanbase who are drawn to the producers showcased on the albums.
“The thing with Nina is that every song I listen to of hers is mind-blowing. They all manage to hit me in that same place, whether it’s about women’s rights or love or love gone bad or politics. She’s one of those rare, rare artists that are able to do that.” (Derek Vincent Smith, USA Today)
Mastered at 101 Mastering - Los Angeles CA Except 'Feeling Good' mastered @ Amorphous Music Studios, CA 2013 and 'Don't Let Me Be Misunderstood,' mastered at Ten Eight Seven Mastering - London, UK

A compilation dedicated to funk and pre – zouk period, which has never been documented before. It is compilated by specialists of the genre: Julien Achard (Digger's Digest) and Nicolas SKLIRIS (ex-Superfly Records).
After the success of Kouté Jazz, Heavenly Sweetness comes back with a dancefloor but not jazz compilation, enough to move your feet at through the whole summer ! 13 disco, boogie and Zouk tracks recorded in the 80’s in the West Indies.
The advantage of this selection is precisely that it reveals a broader spectrum than the zouk music style that are badly defined. Most of the tracks, were not much broadcasted even if interpreted by some big names in Caribbean music (Pierre-Edouard Decimus / Patrick St. Eloi / Eddy La Viny). They were too fast classified as Zouk. These Tracks reveal this will of singularity, this merger between traditional and other rhythms genres (funk, disco, afro-beat, Latin Brazilian ...), with the addition of new instruments such as synthesizers and drums machine in the creative process.
In many zouk’s albums, this period often included one or even several, tracks that were qualified as "proto-zouk" and "funky-zouk" or the "boogie-zouk" to emphasize the fusion of genres . But these tracks have remained unknown to the general public because only the "hits" were played on the radio, dance floors (the famous "tan" or “zouk”), clubs and bus.