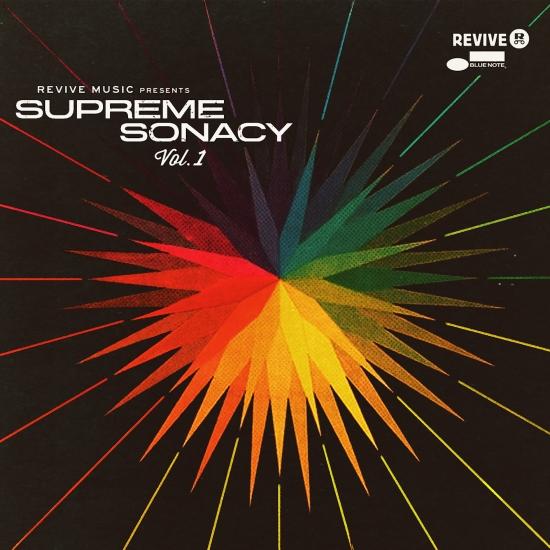 The compilation album „REVIVE Music Presents: Supreme Sonacy (Vol. 1)“, produced by REVIVE in partnership with the legendary Blue Note Records, gathers the fearless sounds of today’s stellar talents and seasons it all with REVIVE’s signature spirit of rebellion.
“The title ‘Sonacy’ alludes to the supreme, transcendent power that exists at the intersection of every musical tradition,” says Stabile, who served as the project’s executive producer. “It is the term for the undefined, unexplained derivative of sound-- a melodic experience without conformity, without category. Much too expansive to explain, it just is.”
REVIVE Music’s sophomore project, Supreme Sonacy (Vol. 1) brings together long-time REVIVE collaborators Igmar Thomas and Raydar Ellis, as well as Grammy Award-winners Jeff “Tain” Watts and Ben Williams ​(courtesy of Concord Records). But Stabile didn’t stop there. She also enlisted such well-known musicians from today’s scene as Marcus Strickland, Brandee Younger, Keyon Harrold, Maurice Brown, Justin Brown, Kris Bowers ​(courtesy of Concord Records), Jaleel Shaw, Marc Cary, Casey Benjamin, Dana Hawkins, Terry Slingbaum, Chris Potter, Chelsea Baratz, Nadia Washington, Louis Cato, Dezron Douglas, Eldar Djangirov, Anne Drummond, James Genus, as well as the composer Raymond Angry.
The all-star lineup that make up Supreme Sonacy Vol. 1 serves as our narrative, which is steeped in the importance of community and realization for a balance between tradition and innovation. It is a project where the present stands on the shoulders of the past for inspiration and where tradition welcomes innovation. Regardless of the numerous contributors in the album, it is unified by one singular sound where the past and the present walk hand-in-hand to the future. Born from a giant leap of faith, Supreme Sonacy Vol. 1 is the first compilation album to be released from Blue Note Records. Under the baton of Don Was, Blue Note stands to make history yet again during its 75-year reign as this idiom’s champion sound. ”REVIVE is positioned at the heart of this decade’s progressive music,” shares Blue Note President, Don Was. “I can think of no better way to honor the tradition of Blue Note Records than to associate ourselves with such a forward-looking, activist organization.” While REVIVE looks to the past for inspiration, Blue Note and Don Was look to REVIVE for innovation.
Mastered by Josh Kessler at Kessler Mastering, Brooklyn, NY
Recorded and Mixed by Tariq Khan at The Breeding Ground, New York, NY
Except Track 6, recorded by Paul Wickliffe at Avatar Studios, New York, NY
Produced by Meghan Stabile

A compilation dedicated to funk and pre – zouk period, which has never been documented before. It is compilated by specialists of the genre: Julien Achard (Digger's Digest) and Nicolas SKLIRIS (ex-Superfly Records).
After the success of Kouté Jazz, Heavenly Sweetness comes back with a dancefloor but not jazz compilation, enough to move your feet at through the whole summer ! 13 disco, boogie and Zouk tracks recorded in the 80’s in the West Indies.
The advantage of this selection is precisely that it reveals a broader spectrum than the zouk music style that are badly defined. Most of the tracks, were not much broadcasted even if interpreted by some big names in Caribbean music (Pierre-Edouard Decimus / Patrick St. Eloi / Eddy La Viny). They were too fast classified as Zouk. These Tracks reveal this will of singularity, this merger between traditional and other rhythms genres (funk, disco, afro-beat, Latin Brazilian ...), with the addition of new instruments such as synthesizers and drums machine in the creative process.
In many zouk’s albums, this period often included one or even several, tracks that were qualified as "proto-zouk" and "funky-zouk" or the "boogie-zouk" to emphasize the fusion of genres . But these tracks have remained unknown to the general public because only the "hits" were played on the radio, dance floors (the famous "tan" or “zouk”), clubs and bus.