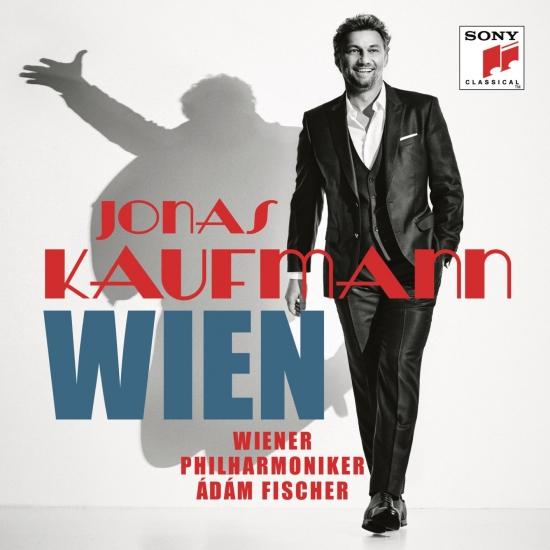 Jonas Kaufmann’s new album is a deeply personal tribute to the world-famous melodies from the birthplace of waltz and operetta. Hence its title: “Wien” - the German for “Vienna”. None other than the Vienna Philharmonic is a more natural fit for such a recording of evergreen hits, with the varied programme conducted by Ádám Fischer. Soprano Rachel Willis-Sørensen joins on the duets, including the title melody of Wiener Blut. “Wien”, Jonas Kaufmann’s new album, will be released on October 11, 2019, after which he will take the same programme on a European tour.
Jonas Kaufmann has always had a special rapport with Austria and Vienna. His grandmother had a fondness for the light classics and was happy to sing the evergreens of Johann Strauss, Franz Lehár and Robert Stolz – a nice contrast to his grandfather’s passion for Wagner. As a child, Jonas spent much of his free time on his grandparents’ farm in Tyrol. Austrian television was almost more familiar to him than its German counterpart. In this way he absorbed the full breadth of Vienna’s entertainment scene, from Peter Alexander to Georg Kreisler. He loved to imitate Hans Moser’s Viennese twang and to slip into the role of “Herr Karl” (aka Helmut Qualtinger). Mastering Viennese dialect was child’s play.
Since then he has had a deep love for Viennese songs and operetta. “The music always put me in a good mood”, he recalls. “When I had unlikeable things to do as a student, like cleaning or vacuuming, all I had to do was play Carlos Kleiber’s Fledermaus recording, and in no time at all I had a grin on my face.”
In many ways “Wien” takes Jonas Kaufmann back to his roots. His very first professional stage production, while still a student, was A Night in Venice. That was in Regensburg back in 1993-94, when he sang Caramello more than 30 times. All the more reason to feature the tenor highlights of this Johann Strauss operetta on “Wien”, along with duets from Die Fledermaus, Wiener Blut and Lehár’s Merry Widow. As in his concertante Fledermaus performance at last year’s Dresden New Year’s Eve Gala, his superb partner in the duets is Rachel Willis-Sørensen.
In addition to Kaufmann’s première recordings of Johann Strauss favourites, the new album contains a wide selection of Viennese songs, ranging from Robert Stolz (“Im Prater blüh’n wieder die Bäume”) to Peter Kreuder (“Sag beim Abschied leise Servus”) and Hermann Leopoldi (“In einem kleinen Café in Hernals”) all the way to Georg Kreisler’s “Der Tod, das muss ein Wiener sein”. Nor can any Vienna album fail to include the city’s unofficial anthem, Rudolf Sieczyński’s “Wien, du Stadt meiner Träume”, better known all over the world as “Wien, Wien, nur du allein”.
And what orchestra is better suited to record these musical gems than the Vienna Philharmonic? This was obvious from the first note of the recording session in Vienna. When the musicians, conducted by Ádám Fischer, played the opening bars, a smile immediately spread across the face – and in the heart – of everyone present.
Jonas Kaufmann will present his new album at a concert in Vienna’s Konzerthaus on October 14, with soprano Rachel Willis-Sørensen again at his side. In January 2020 he will take the programme on tour to Munich, Budapest, Stuttgart, Berlin, Nuremberg, Paris, Hamburg, Brussels, Dusseldorf, Lucerne and Baden-Baden, under the title “My Vienna”.
Jonas Kaufmann, tenor
Wiener Philharmoniker
Adam Fischer, conductor