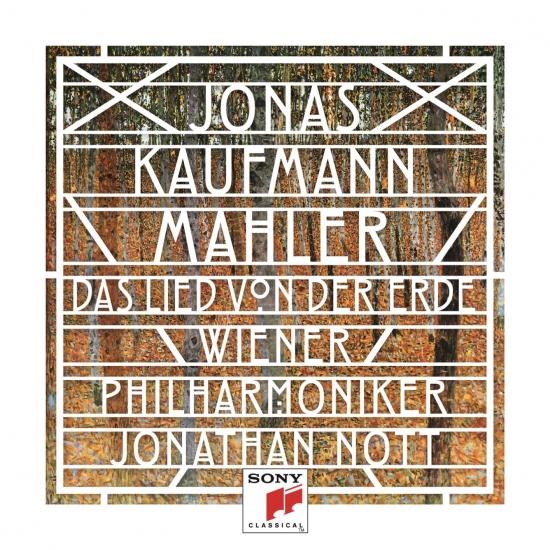 Gustav Mahler's masterpiece Das Lied von der Erde (Song of the Earth) has always been subtitled as a Symphony for Tenor and Alto (or Baritone) and traditionally two voices have sung the six movements of the work. However Jonas Kaufmann felt differently about this and decided to sing both parts himself. This is the first time that one voice has sung both parts for a recording of this piece. Last June, in the tradition-steeped Great Hall of the Vienna Musikverein, where a number of outstanding Mahler performances have taken place, Kaufmann joined the Vienna Philharmonic under the baton of Jonathan Nott for this historic recording. According to the Kurier newspaper after the performance, "this experiment went far beyond the risky test phase and, in the end, became a complete work of art in itself. What would normally be considered pretentious is absolutely logical in the case of Kaufmann, who is able to showcase the splendor of his baritone as well as the radiant upper reaches of his range."
Munich-born singer, Jonas Kaufmann, is without a doubt at the absolute top echelon of the operatic world. He is in extreme demand with the world's most influential conductors, selling out opera houses and concert venues months in advance wherever he performs. In 2011, he received the Opera News Award in New York and was made a Chevalier de l'Ordre des Arts et des Lettres in France. He has been awarded "Singer of the Year" by many prestigious journals including ECHO Klassic and Musical America. Kaufmann is also an internationally sought-after concert and lieder singer. In October of 2011 he performed the first solo recital to be given at the Metropolitan Opera since Luciano Pavarotti in 1994.
“Kaufmann certainly has the “baritonal” low notes to justify his decision, and the ringing tenorial top...Kaufmann is more rewarding in the “baritone” songs, his eloquent diction always a pleasure, and with the nuance and sensibility of a great lieder singer...Not perfection, but this is a must-hear for Mahlerians.” (Sunday Times)
"And so it was moving after all to find the vast scope of this work, from the sheer fullness and intensity of life to the final expiration, united by a single voice.” (Der Standard)
“For the first time Jonas Kaufmann sang all six movements of Mahler’s Das Lied von der Erde at the Musikverein, in other words, not only the movements for tenor but also those for baritone or contralto. With most singers this would seem presumptuous, but with Kaufmann it results in absolute logic because in this way his baritonal timbre is set off to magnificent advantage, while his top notes, none the less, remain radiant. […] the concert with the Vienna Philharmonic under Jonathan Nott became a musical and vocal event of the first order. […] With his wonderful ability to shape a melodic line, his outstanding diction and intonation and his exemplary phrasing Kaufmann made the whole enterprise his own.” (Der Kurier)
Jonas Kaufmann, tenor
Wiener Philharmoniker
Jonathan Nott, conductor