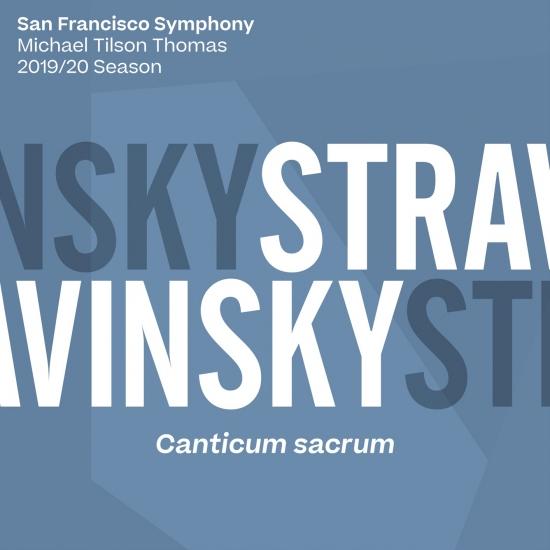 Stravinsky precedes the five “real” movements of Canticum sacrum with a brief Dedicatio for the tenor and baritone soloists and three trombones, measures in which he actually sets to music the formal dedication to the City and its Patron Saint. Here, in these nine introductory bars, florid in line, austere in sonority, Stravinsky harks back to the Renaissance and Baroque traditions.
The subject of the first full movement of Canticum sacrum, Euntes in mundum, is Jesus’s exhortation to the Apostles to go out into the world and preach. This is grandly sonorous music for the full forces. Right away, the staccato repeated notes of trumpets with trombone and bassoons provide the Stravinsky signature. In this movement we meet a sound to be found nowhere else in Stravinsky’s music, that of the organ, which is used for punctuation as part of the orchestral tutti, but which, its bass line lightly doubled by bassoons, has two solemn solo interludes.
After the hieratic grandeur of Euntes in mundum comes a more intimate music, its text drawn from the Song of Songs. Surge, aquilo is a tenor solo in Stravinsky’s most ecstatically florid vocal style, and with an amazing kaleidoscopic accompaniment for flute, English horn, harp, and three basses. This movement is Stravinsky’s leap into full-blown, twelve-note serialism. What matters to us as listeners is the ardent lyricism of the tenor’s love song. Probably the most celebrated piece written for Saint Mark’s is the glorious collection by Claudio Monteverdi known as the Vespers of 1610. Aside from general ideas of contrast and range of types of music, it also gave Stravinsky a model for the virtuoso vocal writing of Surge, aquilo.
The third movement is Canticum’s biggest. (Of the five domes of Saint Mark’s, the central one is the biggest.) The comprehensive title of this movement is Ad tres virtutes hortationes (Exhortation to the Three Virtues), and its three sections, each the length of one of the other, independent movements, are headed Caritas (Love), Spes (Hope), and Fides (Faith). The opening organ music, which returns for the start of each section and also at the end, ties this cantata-within-the-cantata together.
The fourth movement, Brevis motus cantilenae, presents a brief scene from the Gospel According to Saint Mark, that of Jesus healing the deaf and dumb. The main voice is that of the baritone soloist, and he is backed up by the chorus.
The final movement, Illi autem profecti, picks up the theme—verbal and musical—of the first section. There the Apostles were exhorted to go into the world and preach; here we learn that they have done so. The music of this movement is the same as that of the first, only in reverse order, as a mirror image. (Michael Steinberg)
San Francisco Symphony
Michael Tilson Thomas, conductor

Tilson Thomas: From the Diary of Anne Frank & Meditations on Rilke