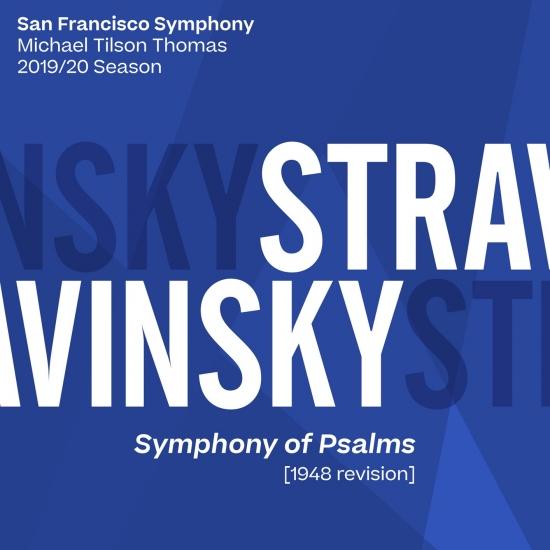 Info for Stravinsky: Symphony of Psalms

That a composition should have unique thematic material is a familiar enough idea, at least for the nineteenth and twentieth centuries; that it should, or even can, have a unique sonority is more specifically a Stravinskian thought. What Stravinsky calls for in the Symphony of Psalms is an altogether special distribution with unusual concentration on certain sounds (flutes, trumpets, and pianos) and complete omission of others (clarinets and high strings).
Stravinsky’s practice is opposed to the classic‑Romantic way of “modulating” organically from one event to the next. Instead, he proceeds by shock. He makes a deliberately violent leap from the clipped opening chord to a scurrying sixteenth‑note figuration and back to the chord. Another vital feature is the dynamic marking of that first chord, mezzo-forte. The force of the gesture is unmistakable, and every other composer would have expressed it with a smashing hammer blow of sound. Stravinsky turns its energy inwards, and the compressed, even repressed, nature of his expressive impulses provides an essential clue to the sources of the beauty and power of his music. The Symphony’s intensely moving final pages, “Laudate eum in cymbalis benesonantibus . . . ,” are another manifestation of that same spiritual reserve.
Stravinsky is much concerned with unity. The psalms he chose are unified textually. The 39th Psalm is like an answer to the 38th. The “Alleluia” with which the 150th begins is the “new canticle” of the 39th. In another sense the Symphony is unified in that its three movements are linked and to be sung and played without pause. The first psalm ascends rapidly to its conclusion. With the first notes of the next psalm it becomes clear that the whole first movement has been one great upbeat to the second. Here is Stravinsky’s account of that second movement: “The ‘Waiting for the Lord’ Psalm makes the most overt use of musical symbolism in any of my music before The Flood. An upside-down pyramid of fugues, it begins with a purely instrumental fugue of limited compass and employs only solo instruments. . . . The next and higher stage of the upside‑down pyramid is the human fugue, which does not begin without instrumental help for the reason that I modified the structure as I composed and decided to overlap instruments and voices to give the material more development, but the human choir is heard a cappella after that. The human fugue also represents a higher level in the architectural symbolism by the fact that it expands into the bass register. The third stage, the upside‑down foundation, unites the two fugues [Et immisit in os meum canticum novum].”
Stravinsky regards Psalm 150 “as a song to be danced, as David danced before the ark.” He also startled many of his listeners and readers when Dialogues and a Diary (his book with Robert Craft) came out in 1963 with the statement that “the allegro in the 150th Psalm was inspired by a vision of Elijah’s chariot climbing the heavens [11 Kings 2, 11]; I do not think I had ever written anything so literal as the triplets for horns and piano to suggest the horses and the chariot. The final hymn of praise must be thought of as issuing from the skies; agitation is followed by the calm of praise.”
There is one more great crescendo as God is praised with timbrel and choir (Stravinsky does not take the Psalmist’s hints on orchestration), but for the praise on high-sounding cymbals and cymbals of joy, the music settles into timeless, motionless quiet. Great censers swing and quiet voices fill the air with their adoration. Or, in music, pianos, harps, and timpani move through three notes over and over, while in the same register as the voices, cellos and trumpets, later on oboes, finally all the winds, spread harmony at once rich and luminous. The “Alleluia,” the new canticle, returns for a moment to resolve, with the last “Dominum,” everything into a C major chord, severe and beatific, as beautiful and as special as only Stravinsky could make it. (Michael Steinberg)
San Francisco Symphony
Michael Tilson Thomas, conductor

Tilson Thomas: From the Diary of Anne Frank & Meditations on Rilke