Music From Big Pink The Band 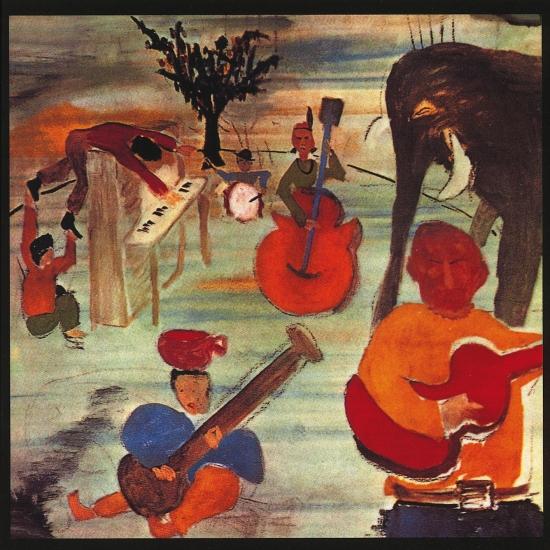 The Band emerged from months of seclusion with this enthralling debut album. It followed a lengthy spell accompanying Bob Dylan, which culminated in sessions known as The Basement Tales. Three songs herein were revived from those recordings, and the remainder showed a similar pastoral spirit. Where contemporaries sought expression in progressive music, the Band were largely reflective, creating atmosphere from traditional forms and distilling the results in an economic style. Their ensemble playing and rural voices were best captured on 'The Weight,' an elliptical composition which displayed their craft to perfection. Americana of every hue can be gleaned from this collection, the depth of which left a marked impression on audiences and musicians alike.
„None of the Band's previous work gave much of a clue about how they would sound when they released their first album in July 1968. As it was, Music From Big Pink came as a surprise. At first blush, the group seemed to affect the sound of a loose jam session, alternating emphasis on different instruments, while the lead and harmony vocals passed back and forth as if the singers were making up their blend on the spot. In retrospect, especially as the lyrics sank in, the arrangements seemed far more considered and crafted to support a group of songs that took family, faith, and rural life as their subjects and proceeded to imbue their values with uncertainty. Some songs took on the theme of declining institutions less clearly than others, but the points were made musically as much as lyrically. Tenor Richard Manuel's haunting, lonely voice gave the album much of its frightening aspect, while Rick Danko and Levon Helm's rough-hewn styles reinforced the songs' rustic fervor. The dominant instrument was Garth Hudson's often icy and majestic organ, while Robbie Robertson's unusual guitar work further destabilized the sound. The result was an album that reflected the turmoil of the late '60s in a way that emphasized the tragedy inherent in the conflicts. Music From Big Pink came off as a shockingly divergent musical statement only a year after the ornate productions of Sgt. Pepper, and initially attracted attention because of the three songs Bob Dylan had either written or co-written. Soon, however, as 'The Weight' became a minor singles chart entry, the album and the group made their own impact, influencing a movement toward roots styles and country elements in rock. Over time, Music From Big Pink came to be regarded as a watershed work in the history of rock, one that introduced new tones and approaches to the constantly evolving genre.“ (William Ruhlmann, All-Music Guide)
'...[One] of rock's few perfect albums, [an] immaculate reflection of [its] times [with] master fictions told with the spit and color of a fur trapper's memoirs...the bonus tracks are sweet gravy...' (Rolling Stone)
Robbie Robertson, guitar, keyboards, vocals
Rick Danko, bass, violin, vocals
Levon Helm, guitar, drums, vocals
Garth Hudson, keyboards, saxophone
Richard Manuel, drums, keyboards, vocals
Engineered by Don Hahn
Produced by John Simon
Digitally remastered
Ranked #34 in Rolling Stone's '500 Greatest Albums Of All Time'