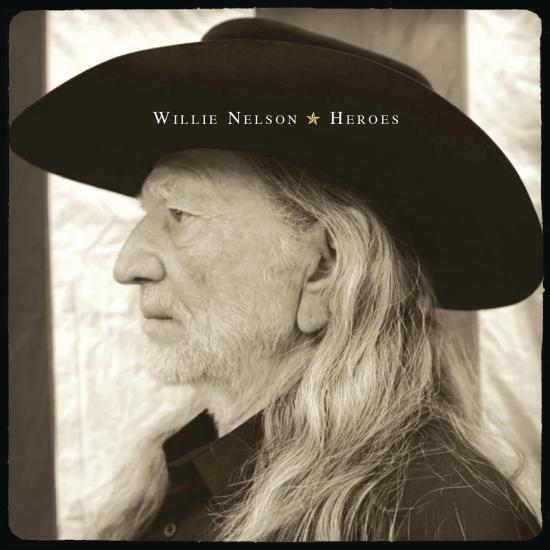 Returning to the Columbia/Sony family after nearly two decades away, Willie Nelson once again tries to be everything to everybody on 2012's Heroes, an appealingly misshapen collection of classics, contemporaries, and originals. Heroes -- its title signifying no great concept -- is roughly divided into quarters, with part of the album devoted to the Western swing and Texas country he's always loved to sing, part consisting of new songs from Willie, part originals from his son Lukas, and part covers of newer, rock-oriented tunes from the likes of Tom Waits, Eddie Vedder, and Chris Martin.
Each of these categories is a bit hit-or-miss, either succumbing to cutesy novelty (the dope-smoking anthem 'Roll Me Up and Smoke Me When I Die,' complete with country cadences from a non-rapping Snoop Dogg) or laziness, and there's a wee bit too much Lukas Nelson scattered throughout the record, with the son of the father singing on no less than nine of the album's 14 songs.
This can be too much of a strong spice, obscuring the overall flavor of the music, but Lukas contributes a couple of the record's best songs in 'Every Time He Drinks He Thinks of Her' and 'The Sound of Your Memory,' songs that fit well next to a quite beautiful version of Vedder's 'Just Breathe' and yet another strong, swinging rendition of 'My Window Faces the South.'
And so Heroes kind of winds up summarizing all that's good and bad about Willie as he approaches his 80th birthday: he's open to everything but has no innate editor, so he whiffs as often as he connects, but when he does connect, it's a wonder to behold...and somehow he can still surprise whenever he sings those old songs.“ (Stephen Thomas Erlewine, AMG)
Willie Nelson, guitar, vocals
Lukas Nelson, vocals, guitar, electric guitar
Micah Nelson, vocals
Billy Joe Shaver, vocals
Ray Price, vocals
Snoop Dogg, vocals
Kris Kristofferson, vocals
Merle Haggard, vocals
Jamey Johnson, vocals
Sheryl Crow, vocals
Buddy Cannon, bass, acoustic guitar, background vocals on 'Heroes'
Melonie Cannon, background vocals on 'Heroes'
Mickey Raphael, harmonica
Butch Carr, synthesizer
Steve Brewster, drums
Jim Brown, piano, Wurlitzer, B-3 organ
Tony Creasman, drums
Kevin Grantt, bass
Mike Johnson, steel guitar
Lance Miller, background vocals on 'Heroes'
Paul Shaffer, B-3 organ
Bobby Terry, electric guitar, acoustic guitar
Recorded at Big Gassed Studios, Blackbird Studios, Brewbeat Studio, Nashville, TN, Cannon Productions, DSR, Hollywood, CA
Engineered and mixed by Butch Carr, Justin Stanley, Jeremy Brown, T.W. Cargile, John 'Ace' Otten
Mastering by Andrew Mendelson
Produced by Buddy Cannon