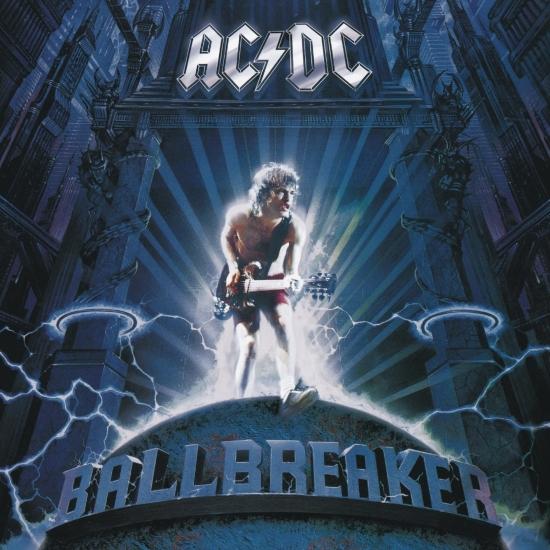 "Ballbreaker" is the 13th studio album by Australian hard rock band AC/DC. It was the band's twelfth internationally released studio album and the thirteenth to be released in Australia.
Ballbreaker marked the return of drummer Phil Rudd, who had played on all AC/DC albums from their Australian album T.N.T. (1975) to Flick of the Switch (1983). Rudd had left during the Flick of the Switch sessions due to drug problems and his incompatibility with Malcolm Young. According to Arnaud Durieux's book AC/DC: Maximum Rock & Roll, Rudd attended AC/DC's show in Auckland in November 1991 and, after a friendly meeting with the band backstage, made an "open-ended pitch" to rejoin if anything changed with the band's current drummer Chris Slade. Durieux reports that the band eventually invited Rudd to rejoin and he accepted in August 1994, much to the chagrin of Slade, who had been recording demos with the band in London. Slade told Rock Hard France in June 2001 that he was so disappointed and disgusted that he did not touch his drum kit for three years. Slade would eventually rejoin the band for their performance at the 57th Annual Grammy Awards Ceremony and the 2015 Rock or Bust World Tour following Rudd's legal issues involving illegal drug possession and threatening to kill his former personal assistant, both of which forced him out of the band a second time.
"In over 20 years, AC/DC never changed their minimalist, bone-crunching hard rock. During their first ten years, that wasn't a problem, since they were still finding ways to expand and subvert the pattern, but ever since For Those About to Rock, they had trouble coming up with consistent material. Consequently, their performances tended to be a little lazy and their records didn't deliver a reliable knockout punch. Released in 1990, The Razor's Edge showed some signs of life, and their comeback culminated in the Rick Rubin-produced Ballbreaker. What makes Ballbreaker different than the albums AC/DC churned out during the '80s is simple -- it's a matter of focus. Although "Hard as a Rock" comes close, there aren't any songs as immediately memorable as any of their '70s classics, or even "Moneytalks." However, unlike any record since Back in Black, there are no bad songs on the album. Surprisingly, Rubin's production is a bit too dry, lacking the muscle needed to make the riffs sound truly earthshaking. Nevertheless, Angus Young's riffs are powerful and catchy, showcasing every element that makes him one of hard rock and heavy metal's greatest guitarists. Throughout the album, the band sounds committed and professional, making Ballbreaker the best late-period AC/DC album to date." (Stephen Thomas Erlewine, AMG)
Brian Johnson, vocals
Angus Young, lead guitar
Malcolm Young, rhythm guitar, backing vocals
Cliff Williams, bass, backing vocals
Phil Rudd, drums, percussion
Produced by Rick Rubin
Digitally remastered
Please Note: We offer this album in its native sampling rate of 48 kHz, 24-bit. The provided 96 kHz version was up-sampled and offers no audible value!