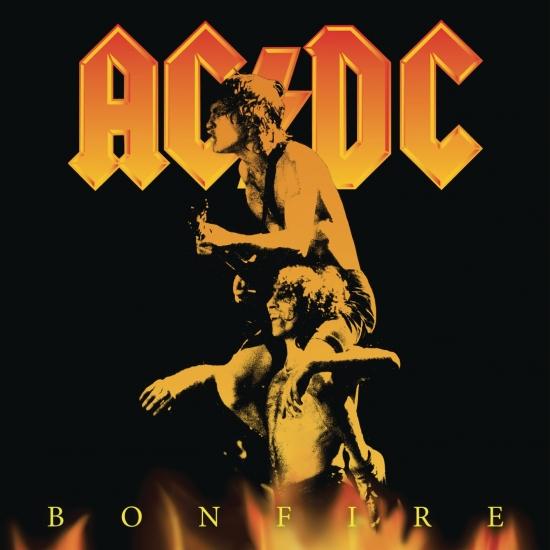 When Bon Scott died at the age of 33, many thought this was the end of AC/DC. The band rebounded by recruiting vocalist Brian Johnson (a Scott favorite) and releasing their best-selling album ever, BACK IN BLACK.
BONFIRE is a five-album tribute to the pugnacious and raspy-voiced Scott, overflowing with the bare-fisted riffs and ribald lyrics that were the trademark of his edition of the band. Recorded live at New York's Atlantic Studios, Disc 1 was originally a promotional only release that's been bootlegged countless times over the years. All thriller, no filler, this recording overflows with plenty of classics ranging from the band's cheeky tribute to venereal disease ("The Clap") to the tale of an over-sexed Rubenesque female fan ("Whole Lotta Rosie".) Discs Two and Three are an expanded version of the soundtrack to the 1980 concert film "Let There Be Rock". Recorded before a French audience, AC/DC's in-your-face performance transcended any cultural differences and the audience often sang along despite language barriers. Entitled VOLTS, consists of work-in-process studio recordings of material such as "Touch Too Much" and "Get It Hot" with different lyrics than the finished versions. The inclusion of the slow blues of "Ride On" shows another side to AC/DC often lost among the lascivious offerings of "Beatin' Around The Bush" and "She's Got Balls". A re-mastered version of BACK IN BLACK completes this set marking the end of one era and the beginning of another.
"Oddly, the legend of Bon Scott never haunted AC/DC. They grieved, certainly, but they were able to move on, releasing Back in Black as a tribute in 1980. The record became their biggest hit and helped them become one of the biggest rock & roll bands in the world. By the late '90s, the group remained popular, and a strange phenomenon had happened -- there were generations of AC/DC fans who came of age after Scott's death, and had only a passing familiarity with the rocker. Perhaps that's one of the reasons why they lovingly assembled the five-disc box set Bonfire in 1997. The set is a tribute to Scott, featuring two live albums -- one from New York in 1978, the other from Paris in 1979, which is essentially the soundtrack to the Let There Be Rock film -- a disc of outtakes, and a remastered version of Back in Black. For hardcore fans, this is something of a dream come true, since the live albums are stronger than any of the group's other live releases, with the possible exception of If You Want Blood You've Got It. The disc of alternate takes, outtakes, and stray live cuts offers no real revelations, but there are enough interesting moments to make it worthwhile. And while any AC/DC fan has Back in Black, it's nice hearing it in this context, because it shows that even if the band could carry on splendidly, they were still missing the insane, wild-man charisma of Bon Scott. Nowhere is that charisma better preserved -- both through music and stories -- than on Bonfire" (Stephen Thomas Erlewine, AMG)
Produced by Harry Vanda, George Young, Mutt Lange
Digitally remastered