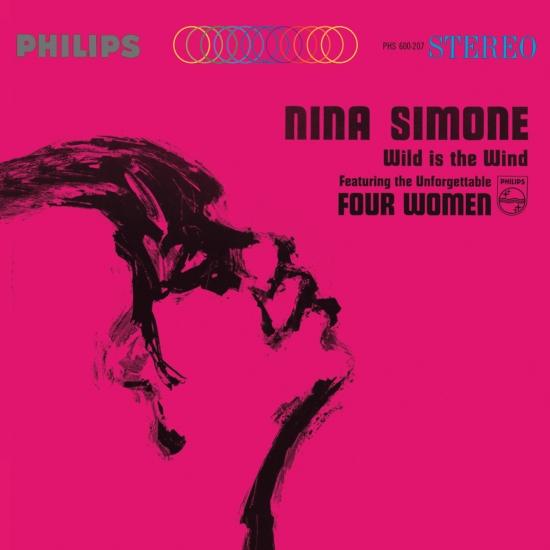 Disarmingly and relentlessly intimate, Wild Is the Wind, Nina Simone’s sixth Philips recording, comprises eleven tracks that together achieve a compelling consistency in mood, performance, and production. Sympathetic arrangements, restrained piano playing, and rich, closely miked vocals mark this stellar album, which includes Simone’s searing original “Four Women.”
„Nina's own compositions (Four Women) and songs penned by Van McCoy (Break Down and Let It All Out) are among the highlights on this 1966 Philips recording. This album was apparently a bit of a pastiche of leftovers from sessions for Nina Simone's four previous albums on Philips. But you'd never guess from listening; the material is certainly as strong and consistent as it is on her other mid-'60s LPs. As is the case with most of her albums of the time, the selections are almost unnervingly diverse, ranging from jazz ballads to traditional folk tunes ('Black Is the Color of My True Love's Hair') to the near calypso of 'Why Keep on Breaking My Heart' to the somber, almost chilling title track. Highlights are two outstanding pop-soul numbers written by the pre-disco Van McCoy ('Either Way I Lose,' 'Break Down and Let It All Out') and 'Four Women,' a string of searing vignettes about the hardships of four African-American women that ranks as one of Simone's finest compositions.“ (Richie Unterberger)
Nina Simone, vocals, piano
Rudy Stevenson, guitar, flute
Lisle Atkinson, upright bass
Bobby Hamilton, drums
Horace Ott & His Orchestra
Recorded in March and April 1964 and January, October, November 1965 in New York.
Produced by Hal Mooney