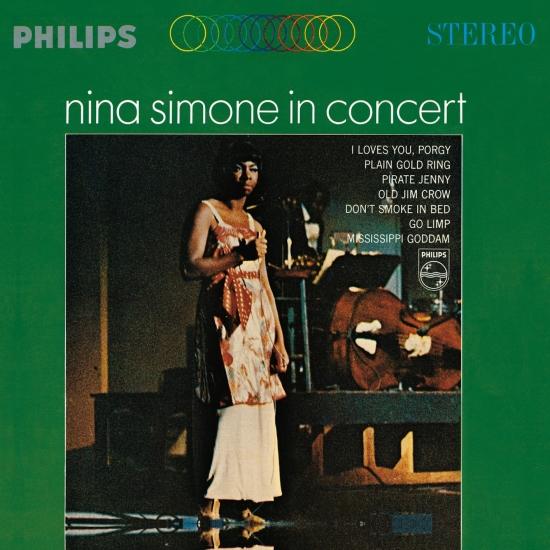 This is probably the most personal album that Simone issued during her stay on Philips in the mid-'60s. On most of her studio sessions, she worked with orchestration that either enhanced her material tastefully or smothered her, and she tackled an astonishingly wide range of material that, while admirably eclectic, made for uneven listening. Here, the singer and pianist is backed by a spare, jazzy quartet, and some of the songs rank among her most socially conscious declarations of African-American pride: 'Old Jim Crow,' 'Pirate Jenny,' 'Go Limp,' and, especially, 'Mississippi Goddam' were some of the most forthright musical reflections of the Civil Rights movement to be found at the time. In a more traditional vein, she also reprises her hit 'I Loves You, Porgy' and the jazz ballad 'Don't Smoke in Bed.' (Richie Unterberger)
„As her accompanists bustle along in a brisk show-time tempo, Nina Simone begins this song from her 1964 album Nina Simone in Concert by saying “The name of this tune is ‘Mississippi Goddam”. The drummer then drops a vaudeville thump accent on the kickdrum, and Simone pauses for audience reaction, which is laughter and a smattering of applause. Without changing the timbre of her voice, she quickly adds, “And I mean every word of it.” There is more laughter from the audience after that, but it’s more tentative than the first burst, and this time no one applauds. There’s no possible way the audience could have prepared themselves for what follows. “Mississippi Goddam” is a subversive tour-de-force, a highly sophisticated piece of musical signifying which mixes confrontational anger, point-blank accusation, and deeply felt frustration with a bouncy show-tune melody and a wonderfully expressive vocal by Ms. Simone.
I love “We Shall Overcome”, “Blowin’ in the Wind”, “A Change is Gonna Come”, and all the other songs associated with or about the Civil Rights struggle of the American 1960s, but for my money, as powerful and accessible as those songs are, none are as emotionally immediate, or possess more unrelenting spiritual force, than “Mississippi Goddam”. The lyrics are a marvel, unraveling at first in a deceptively lighthearted strut (“Alabama’s got me so upset / Tennessee made me lose my rest”) before turning into the most solemn of lamentations around the middle ( “Lord have mercy on this land of mine / We’re all gonna get it in due time”), and then a full-on, unapologetic demand by the end (“You don’t have to live next to me / Just give me my equality!”
The most striking lyric arrives at around 1:44, just as Simone is starting to dig into the real intent of the song. Here, in a single line, Simone captures the dual existential uncertainty of living in a society which repeatedly pronounces you “other”, while also realizing you don’t really have anywhere else to go: “I don’t belong here / I don’t belong there / I’ve even stopped believing in prayer.” Like the song’s title, these lines are a deeply symbolic statement from a bona fide church girl (Simone’s mother was a minister), both a declaration of painful truth, and a plea for that truth to be heard, understood, addressed. By the time Simone murmurs “Bet you thought I was kidding, didn’t you?” after the refrain following those lines, the Carnegie Hall audience is dead silent.
Given Nina Simone’s undeniable prowess with bluesy tempos and songforms, demonstrated in countless later recordings, one has to wonder why she chose to deliver her most confrontational message in the vehicle of an upbeat songform more suited to a Rodgers and Hammerstein-style musical. The lyrics of “Mississippi Goddam” lyrically give voice to the contemporary concerns of African Americans, but ironically, there is not a lot of obvious church, blues, jazz, or R&B to be heard in the music here. The result is a somewhat dislocated sonic context, a feeling that you’re hearing something that just might be different than what it appears to be on the surface. Whether the African Trickster in Simone intended this or not is always up for discussion, but clearly, “Mississippi Goddam” is not meant to be comforting, uplifting, or reassuring in any sort of way; on the contrary, it is meant to be confrontational, discomforting, prophetic: a call to wakefulness in a dangerous time, and perhaps an apocalyptic warning of sorts, as well.
We celebrate and cherish songs and songwriters often because their words and music bring us joy, comfort, and feelings of empathy and belonging. In this case, we remember and celebrate Nina Simone and “Mississippi Goddam” because in 1964, amidst great turmoil in the country and unbearable race-related murders and violence, Nina Simone had the courage to stand on the stage of one of America’s most hallowed venues and deliver a song that expresses the dismayed yet indefatigable heart of a prophet.“ (PopMatters)
Nina Simone, vocals, piano
Rudy Stevenson, guitar
Lisle Atkinson, upright bass
Bobby Hamilton, drums
Digitally remastered.