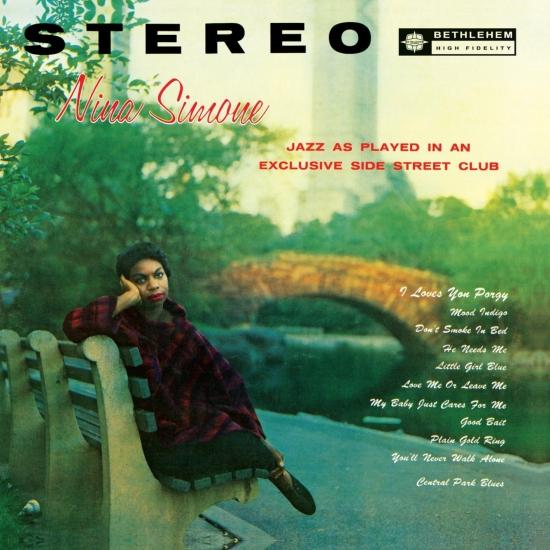 Recorded in New York City, December 1957. Eunice Kathleen Waymon's beautiful, mellifluous voice is one of the most distinctive and celebrated in music. As Nina Simone she recorded more than 40 albums during a long and distinguished career that stretched over five decades. She was described variously as a jazz singer, a soul singer, and a folk singer — really she was all of these and more. Her heartfelt songs remain in the public consciousness to this day, having been made famous by both her and by those who re-recorded them.
Little Girl Blue, aka Jazz As Played In An Exclusive Side Street Club, released in 1957, was her first release for Bethlehem Records. Nina was in her mid-20s at the time of this recording and still had aspirations of becoming a classical concert pianist. She lost millions of dollars in royalties after selling the rights for the songs on this album to Bethlehem records a mere $3,000.
'Little Girl Blue showcases (Simone's) ballad voice as one of mystery and sensuality and showcases her up-tempo jazz style with authority and an enigmatic down-home feel that is nonetheless elegant... Of course, one of Simone's signature tunes was her version of 'I Loves You, Porgy', which appears here for the first time and was released as a single. Her own 'Central Park Blues' is one of the finest jazz tunes here, and it is followed with yet another side of Simone's diversity in her beautiful take on the folk-gospel tune 'He's Got the Whole World In His Hands', with quiet and determined dignity and drama. Another of her instrumentals compositions, 'African Mailman', struts proud with deep Afro-Caribbean roots and rhythms.' (Thom Jurek, allmusic.com)
Nina Simone, vocals, piano
Jimmy Bond, bass
Al Heath, drums
Digitally remastered