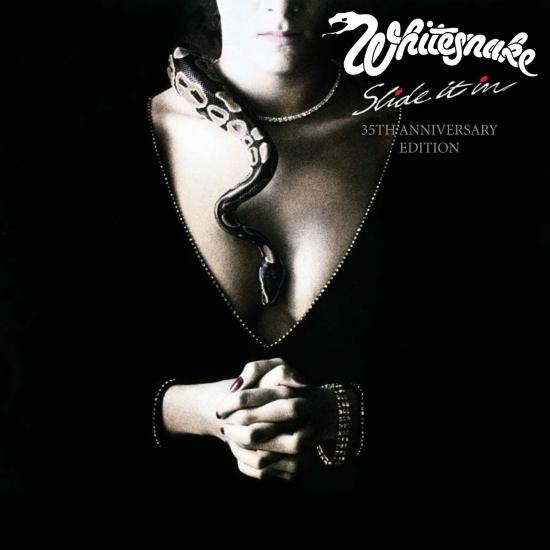 Info for Slide It In (Deluxe Edition, 2019 Remaster)

Whitesnake scored its first platinum-selling album in 1984 with 'Slide It In', a release that has sold more than four million copies worldwide thanks to hard-rocking songs like “Love Ain’t No Stranger,” “Slow An’ Easy” and the title track. The classic album turns 35 this year and Rhino is celebrating with several new versions.
After releasing Saints & Sinners in 1982, Whitesnake reconvened the following year in Germany to begin recording songs for what would become the band’s sixth studio album, Slide It In. At the time, band members included Coverdale, guitarists Micky Moody and Mel Galley, bassist Colin Hodgkinson and keyboardist Jon Lord. The album was initially released in 1984 in the U.K., where it climbed into the Top 10.
Soon after, the band’s line-up changed. Lord left to rejoin Deep Purple and Moody and Hodgkinson were replaced by guitarist John Skyes, and Neil Murray, who was Whitesnake’s original bassist. Prior to its U.S. release in 1985, Slide It In was remixed while newly recorded parts by Skyes, Murray and keyboardist Bill Cuomo were added, resulting in two distinct versions of the album, both of which are included in this set.
We spoke to Hugh Gilmour (exclusively for Keymailrecords) who has been working with the band for the past few years on their album artwork, stage backdrops and merchandise: “...the first track I heard from ‘Slide It In’ was when “Guilty Of Love” was in the charts in August 1983. [I] moved abroad at the end of 1983, so it took a while for me to finally hear ‘Slide It In’, which was probably my brother’s cassette, which came with an extra track. I have lots of favourites, but ‘Slide It In’ is definitely near the top. I’m also working on the new album, 'Flesh And Blood' (due May 2019). And it’s not just the artwork, but all things visual, from the backdrops & scrims on stage, David's stage shirts, the tour merchandise… I’ve even just finished a new ladies shirt for Valentine’s Day.”
David Coverdale, lead vocals
Mel Galley, guitars, backing vocals
Micky Moody, guitars
Colin Hodgkinson, bass
Jon Lord, keyboards
Cozy Powell, drums
Produced by Martin Birch
Digitally remastered