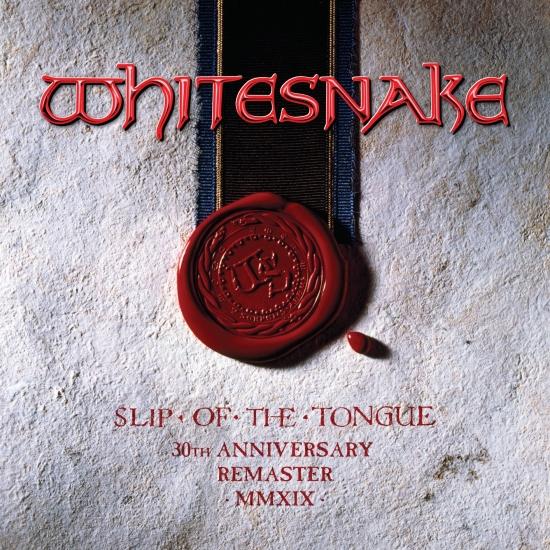 Info for Slip Of The Tongue (Super Deluxe Edition, 2019 Remaster)

Whitesnake scored the band’s third consecutive platinum record with its eighth studio album, Slip of the Tongue. Originally released in November 1989, it peaked at number 10 on the U.K. and U.S. album charts thanks largely to its two Top 40 hits – “Fool For Your Loving” and “The Deeper The Love.” The fan favorite turns 30 this year and Rhino is celebrating with this special HiRes edition set.
This six album collection includes a newly remastered version of the album, plus unreleased studio recordings, audio and video of the band’s performance at the 1990 Monsters of Rock festival, and a new interview with Whitesnake founder and lead singer, David Coverdale.
Following the 8x platinum success of their eponymous album in 1987, Whitesnake returned two years later with Slip of the Tongue. At the time, the band included Coverdale, bassist Rudy Sarzo, drummer Tommy Aldridge, and guitarists Adrian Vandenberg and Steve Vai. Vandenberg and Coverdale co-wrote all but one song on the album, but Vandenberg couldn’t record them in the studio at the time due to a hand injury. To fill the void, Vai joined the band for the album and tour.
Slip Of The Tongue Super Deluxe Edition features unreleased versions of every album track, as well as monitor mixes for the album recorded in 1989. In addition, the collection includes nearly two dozen previously unreleased tracks taken from the session tapes that highlight working versions of album tracks and more. The set also includes the album debut of Slip of the Tongue: The Wagging Tongue Edition. Released exclusively on vinyl in 1989, it features Coverdale being interviewed about each track followed by the song.
David Coverdale, vocals
Steve Vai, guitar
Adrian Vandenberg, guitar
Rudy Sarzo, bass
Tommy Aldridge, drums
Additional musicians:
Don Airey, keyboards
David Rosenthal, keyboards
Claude Gaudette, keyboards
Glenn Hughes, backing vocals
Tommy Funderburk, backing vocals
Richard Page, backing vocals
Digitally remastered