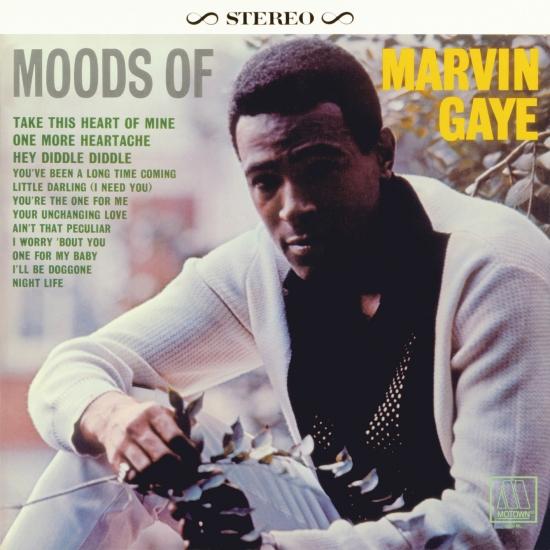 Blessed with a mellifluous tenor and a three-octave vocal range, Marvin Gaye was one of the most consistent and enigmatic of the Motown hitmakers, with a career that exemplified the maturation of soul and black pop into a sophisticated form spanning social and sexual politics.
"After Marvin Gaye recorded tributes to Broadway and Nat King Cole in the previous two years, Motown fans may have had their suspicions raised by an LP titled Moods of Marvin Gaye. Yes, there are a few supper-club standards to be found here, but Gaye moves smoothly between good-time soul and adult pop. Most important are his first two R&B number ones, "I'll Be Doggone" and "Ain't That Particular," both from 1965 and both produced by Smokey Robinson. Berry Gordy's right-hand man also helmed "Take This Heart of Mine" and "One More Heartache," another pair of big R&B scores, and just as good as the better-known hits. As for the copyrights not owned by Jobete, the chestnut "One for My Baby (And One More for the Road)" certainly didn't need another reading, but Gaye's take on Willie Nelson's after-hours classic "Night Life" was inspired. Marvin Gaye was improving with every record, gaining in character and strength of performance, and Moods of Marvin Gaye is a radically better record than its predecessors." (John Bush, AMG)
Marvin Gaye, lead vocals
The Andantes, backing vocals
The Miracles, backing vocals (on "I'll Be Doggone")
The Spinners, backing vocals (on "Hey Diddle Diddle")
The Funk Brothers
Marv Tarplin, guitar (tracks 1, 3, 5-6)
Digitally remastered