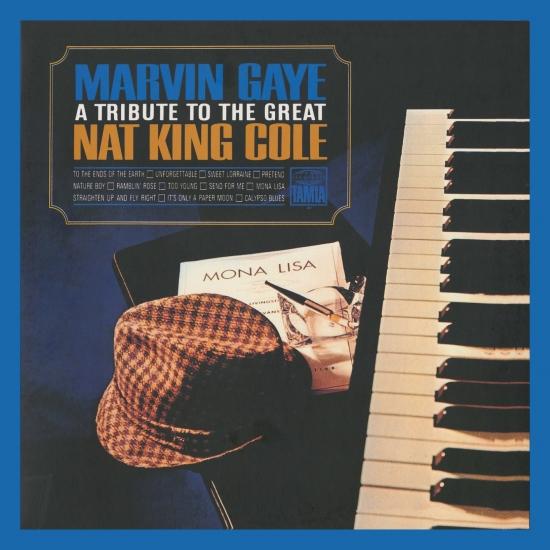 Info for A Tribute To The Great Nat King Cole (Remastered)

A Tribute to the Great Nat "King" Cole is the sixth studio album by Marvin Gaye. It is a tribute album, dedicated to his idol, late jazz performer Nat "King" Cole, who had died of lung cancer earlier in the year.
It was on Monday, 15 February 1965 when the popular American singer and pianist Nat King Cole fatally succumbed to lung cancer. He was just 45 years old. His passing would be commemorated later that year, on 1 November, by a tribute album from a young man – then a rising star of Motown – who himself would also perish prematurely in his mid-40s. His name was Marvin Gaye.
Gaye was 26 when he went into Motown’s Hitsville studios in Detroit to pay his musical respects to one of his singing idols. By then, the young singer had already notched up two US R&B No.1s (‘I’ll Be Doggone’ and ‘Ain’t That Peculiar’) as well as a string of other chart entries. His career was in the ascendant, and the thinking behind recording an album devoted to songs associated with Nat King Cole was not only to doff his cap to a musician whom he greatly admired, but also to show another side of his musical personality and, more importantly – at least from Motown’s perspective – gain a valuable foothold in America’s lucrative supper club market.
Though a singer whose musical roots were deeply embedded in gospel music, in his personal tastes Gaye gravitated towards jazz and, for a long time, harboured aspirations to be the African-American Frank Sinatra. Initially, Motown’s boss, Berry Gordy, indulged Gaye’s ambition to be a middle-of-the-road entertainer, as long as he cut some hit R&B sides in the process. A Tribute To The Great Nat King Cole, then, wasn’t Gaye’s first foray into jazz territory; it was, in fact, the singer’s third attempt at an MOR album, following When I’m Alone I Cry and Hello Broadway, both collections of standards released by Motown in 1964.
Produced by Hal Davis, Marc Gordon and Harvey Fuqua, Gaye’s Nat King Cole tribute opens with a glorious cover of the eden abhez-written ‘Nature Boy’, Cole’s first record to cross over and top the US pop charts, in 1948. Bathed in lush orchestration, Gaye’s silky voice, despite being different in tone and texture from Cole’s, reveals the influence of the Alabama-born singer via its ultra-smooth phrasing.
Cole’s 1950 chart-topper, ‘Mona Lisa’, is also faithfully rendered by Gaye, whose voice is framed by the opulent sound of massed strings (Nelson Riddle arranged Cole’s original but, as was Motown’s practice at the time, none of the personnel or arrangers on Gaye’s album were listed). In a mellow vein, too, are ‘Unforgettable’, ‘Too Young’ and ‘Sweet Lorraine’. The album takes a left fork down a country road on ‘Ramblin’ Rose’, a revamp of Cole’s 1962 million-selling hit, where Gaye’s plaintive lead is counterpointed by syrupy background vocals.
Gaye also covered some early Cole hits on his tribute. The super-infectious ‘Straighten Up And Fly Right’, originally a 1944 US R&B No.1 for Cole’s trio, is reconfigured into a jaunty Sinatra-style swinger. The same year, Cole reached the R&B Top 5 with ‘It’s Only A Paper Moon’, which Gaye also serves up with plenty of big band heft mixed with pizzazz. In sharp contrast, a late-night blues feel imbues ‘Send For Me’, Gaye’s finger-clicking midtempo take on a Cole chart-topper from 1957, while his take on the 1956 B-side ‘To The Ends Of The Earth’ has a Latin-style groove.
Interestingly, A Tribute To The Great Nat King Cole closes with ‘Calypso Blues’, a lesser-known Capitol single that Cole co-wrote and recorded in 1951. With his seraphic voice accompanied solely by pattering congas, Gaye’s version adheres closely to the lean arrangement of the original recording.
Marvin Gaye, vocals
The Funk Brothers
Digitally remastered