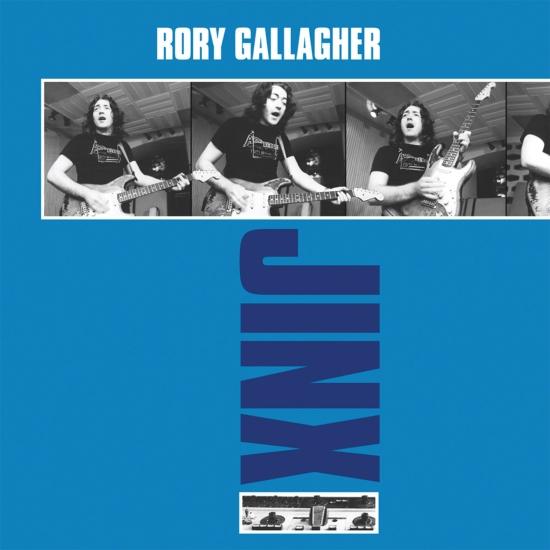 Jinx is the twelfth album and the ninth studio album by the Irish musician Rory Gallagher and was originally released in 1982. The reissue boasts a review of the album originally published in Melody Maker.
"Rory Gallagher sounds inspired throughout JInx, gamely leading new drummer Brendan O'Neill and keyboardist Bob Andrews through the blues-rock paces, even though the guitarist's personal fortunes were on a downslide from which they would never recover. "Big Guns" and "Bourbon," the album's opening selections find Rory in full fiery form, tossing out muscular guitar lines and fiery solos with descriptive lyrics catering to his infatuation with American gangsters. The album also features two of his best, and least known, songs in the spooky, paranoid title track, complete with simmering sax section, boiling tom-tom drums as well as his own stealthy harmonica, and "Easy Come Easy Go," a beautiful, bluesy ballad where Rory double tracks his acoustic and electric guitars. Gallagher's tough vocals take on a new emotional depth not previously heard, and are particularly poignant throughout. Diving into the blues, Lightnin' Slims' "Nothin' but the Devil," one of the two songs added for this reissue, is an acoustic solo showpiece revealing Gallagher's delta roots and substantial slide abilities. Louisiana Red's "Ride On Red, Ride On" is a crackling double-time burner with Rory charging through with an appropriately whisky-soaked approach and a shimmering electric slide solo. Another extra track, "Lonely Mile," a finished tune previously omitted due to the time restrictions of vinyl, is a worthy addition to Gallagher's mid-tempo grinding rocker catalog. Although not his best album, Jinx is a tough and confident release, and it's 2000 reappearance after being difficult to find for almost 20 years, especially in this pristine edition, is reason to rejoice for Rory Gallagher fans." (Hal Horowitz, AMG)
Rory Gallagher, vocals, guitar, harmonica
Gerry McAvoy, bass
Brendan O'Neill, drums, percussion
Recorded May - June 1981 at Dierks Studios, Cologne, Germany
Produced by Rory Gallagher
Digitally remastered