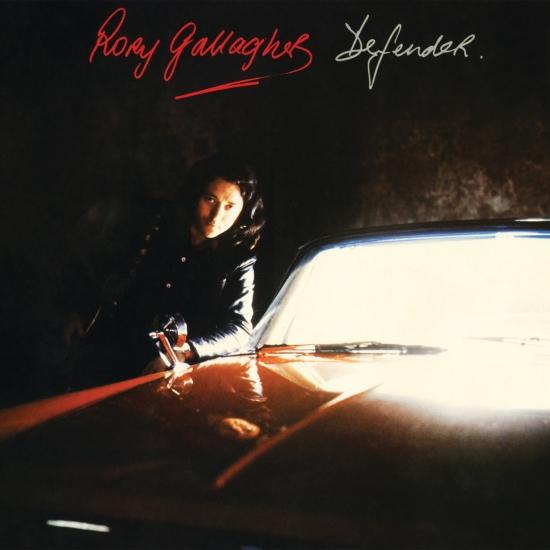 Defender is the thirteenth album and the tenth studio album by Irish musician Rory Gallagher. It was originally released on 1st July 1987 and was recorded at The Point, Olympic, West Three, Music Works and Redan Studios. Rory said of the album “The tone and mood of the new album is blues and angry, but there's a couple of rockers, and a couple that don't fit any category; but it is really a modern blues album.”
"Released five years after his last effort (an eternity for the prolific Irish blues guitar slinger who had been churning out at least an album a year throughout the '70s), Defender is another quality blues-rock offering. Although Gallagher is in fine tough form here and it was his debut release for his own indie label, there is little difference between this and some of his less stellar '70s albums like Top Priority and Photo-Finish. The pounding, guitar-heavy opener "Kickback City" sounds more like hairy rockers Bad Company than anything approaching the deep Chicago and country blues Gallagher dearly loved. The quality picks up substantially as the volume subsides on "Loanshark Blues," but by-the-books crunch-rockers like "Failsafe Day" and the unfortunately titled "Road to Hell" don't bode well for Gallagher moving out from an increasingly formulaic pigeonhole. There are a few corkers here like "Continental Op," a blazing riff that stands with Gallagher's best work and revisits his familiar cloak-and-dagger theme. The swampy, less abrasive "I Ain't No Saint" also pushes the quality up a few notches, as does his gritty version of Sonny Boy Williamson's "Don't Start Me to Talking," the bluesiest song on the disc and one of the few times he pulls out his greasy slide. "Seven Days" is the lone acoustic track and it's a good one, with piano and harp accompaniment and Gallagher singing like he means it as he takes the part of a criminal fleeing from the electric chair. The 2000 reissue adds a pair of rugged bonus tracks (along with a cleaner sound mix), which are actually better, or certainly as good as the best cuts on the rest of this competent but hardly essential Rory Gallagher disc." (Hal Horowitz, AMG)
Rory Gallagher, vocals, guitar, harmonica
Gerry McAvoy, bass
Brendan O'Neill, drums
Additional musicians:
John Cooke, keyboards
Lou Martin, piano on "Seven Days"
Bob Andrews, piano on "Don't Start Me to Talkin'"
Mark Feltham, harmonica on "Don't Start Me to Talkin'"
Recorded 1987 at The Point, London; Olympic Studios, London; West 3 Studios, London; Music Works, London; Redan Studios
Produced by Rory Gallagher
Digitally remastered