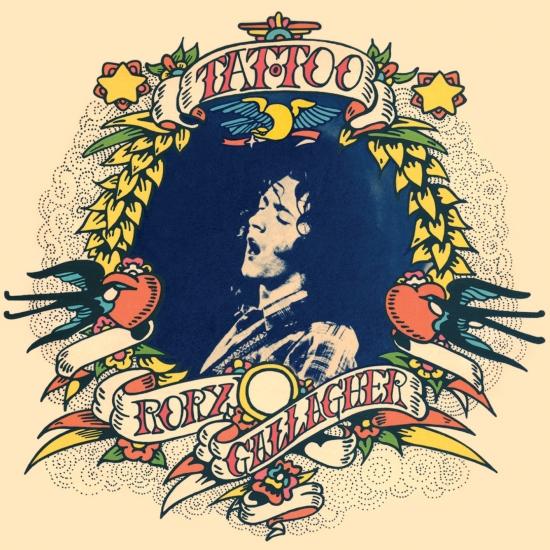 Tattoo is the forth studio album released by Rory Gallagher. It was released on 11th November 1973 and was recorded at Polydor Records studio. It demonstrated Gallagher's eclectic range of musical influences starting with the blues and adding elements from jazz, folk, and country. Signature tracks include “Tattoo’d Lady”, “Cradle Rock” and “A Million Miles Away.
"Gallagher's work ethic was in high gear as he somehow found time to write nine more songs in the midst of non-stop touring for his second album released in 1973. Even more astounding is that far from sounding fatigued or burnt out, his performance here is loose and impassioned, and the tunes are some of the best of his career. Lou Martin's keyboards are better integrated into the band, and drummer Rod de'Ath swings and burns with easy confidence. The double whammy of the album's two crunching leadoff tracks, "Tattoo'd Lady" and "Cradle Rock" illustrate just how comfortable Gallagher is with his backing group, and the smooth-rolling unplugged guitar and harmonica of "20-20 Vision" proves that the blues rocker is a more than adequate Delta/folk musician. Better still is the acoustic slide intro to "Who's that Comin'" that effortlessly and discretely eases its way into a Chicago styled, mid-tempo, electric attack. "A Million Miles Away" pushes the envelope even further with a slow, greasy swamp groove against which Gallagher picks clipped, staccato notes over a well-oiled rhythm section, thick Hammond organ overdubbed with piano from Martin, and even a multi-tracked sax section from the guitarist. The 2000 reissue adds "Tuscon, Arizona" an unusual acoustic waltz-time country Link Wray cover, and a seemingly unrehearsed driving version of the blues standard "Just a Little Bit" that runs almost eight minutes, and is interesting for about half that. Short but informational track-by-track liner notes from Gallagher's brother Donal and crisp remastered sound makes this an essential purchase for established fans and an excellent place to start for new Rory Gallagher listeners." (Hal Horowitz, AMG)
Rory Gallagher, guitars, vocals, harmonica, saxophone, mandolin, bouzouki
Gerry McAvoy, bass
Lou Martin, keyboards, accordion
Rod de'Ath, drums, percussion
Recorded August 1973 at Polydor Studios, London
Produced by Rory Gallagher
Digitally remastered