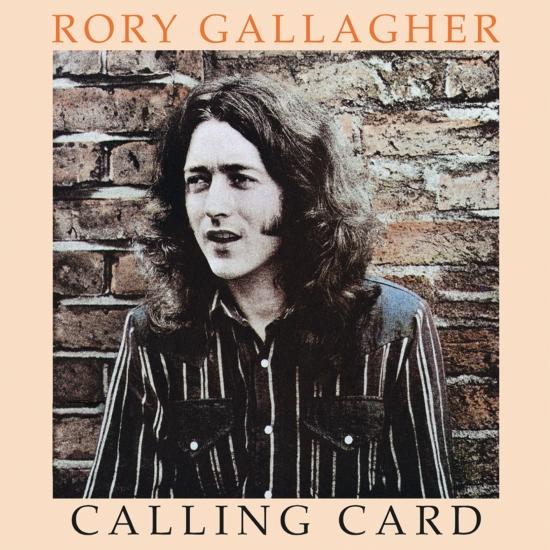 Calling Card is the eighth album by Irish singer/guitarist Rory Gallagher. A 1976 release, it was his second of four albums released on Chrysalis Records in the 1970s. Deep Purple/Rainbow bass guitarist Roger Glover co-produced with Gallagher: it was the first time that Gallagher worked with a "name" producer and the only successful such collaboration.[1] It was also the last album Gallagher would do with Rod de'Ath (drums) and Lou Martin (keyboards). After Calling Card, Gallagher retained only his long-time bass guitarist Gerry McAvoy and hired Ted McKenna on drums. This revised power trio was Gallagher's line up for the next five years when Brendan O'Neil took the sticks.
"Gallagher's second album for Chrysalis -- and last with his longstanding trio of Lou Martin (keyboards), Rod De'Ath (drums) and Gerry McAvoy (bass) -- was a milestone in his career. Although Calling Card was produced by Deep Purple bassist Roger Glover and not surprisingly contained some of his most powerfully driving rockers, tracks like the acoustic "Barley & Grape Rag" and the jazzy, soulful, finger snapping title cut -- a perennial concert favorite -- found the Irish rocker not only exploring other musical paths, but also caught him on one of his most consistent songwriting streaks ever. Even "Do You Read Me," the muscular opening track, is a remarkably stripped-down affair that adds subtle synths to the rugged blues rock that was Gallagher's claim to fame. While "Moonchild," "Country Mile," and "Secret Agent" displayed catchy hooks, engaging riffs, and raging guitar work (the latter adds a touch of Deep Purple's Jon Lord-styled organ to the proceedings), it's the elegant ballad "I'll Admit You're Gone" that shifts the guitarist into calmer waters and proves his melodic talent was just as cutting on quieter tunes. And it's a crime that the gorgeous "Edged in Blue," certainly one of the artist's saddest and most beautiful pop melodies, was overlooked in his catalog. The 1999 reissue sports track-by-track and first person liner notes from Gallagher's brother Donal, crisp remastered sound, and two additional songs not included on previous versions, one of which, "Public Enemy (B-Girl Version)," later appeared on the Photo-Finish album in an inferior performance to this. Arguably Rory Gallagher's finest studio effort, it was among his best and most varied batch of songs, and it is a perfect place for the curious to start their collection as well as an essential disc showing Gallagher at the peak of his powers." (Hal Horowitz, AMG)
Rory Gallagher, vocals, guitar and harmonica
Gerry McAvoy, bass
Lou Martin, keyboards
Rod de'Ath, drums
Recorded September 1976 at Musicland Studios, Munich
Produced by Roger Glover, Rory Gallagher
Digitally remastered